Washington (AP) — The U.S. Postal Service has warned 46 states and the District of Columbia it cannot guarantee all ballots cast by mail for the November election will arrive in time to be counted, The Washington Post reported Friday. Voters in several states also complained that some curbside mail collection boxes were being removed.

Even as President Donald Trump rails against widescale voting by mail, the post office is bracing for an unprecedented number of mail-in ballots as a result of the coronavirus pandemic.

The warning letters sent to states and obtained by the Post raise the possibility that tens of millions of Americans eligible for mail-in ballots this fall will not be able to use them — even if they follow election rules.

The revelation that some voters could be disenfranchised comes amid a campaign by Trump to sow doubts about the election. Though Trump casts his own ballots by mail, he’s vigorously criticized efforts to allow more people to do so, which he argues without evidence will lead to increased voter fraud. Recently, members of Congress from both parties have voiced concerns that post office mail boxes, which is how many will cast their ballots, have abruptly been removed.

And at the same time that the need for timely delivery of the mail is peaking, service has been curtailed amid cost-cutting and efficiency measures ordered by the Trump-appointed new postmaster general, Louis DeJoy, a former supply-chain CEO and a major political donor to Trump and other Republicans. He has implemented measures to eliminate overtime pay and hold mail over if distribution centers are running late.

A spokesman for the Postal Service did not immediately respond to a request for comment.

Alabama Secretary of State John Merrill confirmed his office did receive a copy of the letter.

“As of today, there are 76 days left to apply for an absentee ballot ahead of the November 3 General Election,” Merrill said in a statement. “Our Office has been actively working to encourage voters across the State of Alabama to go ahead and make application for their absentee ballot so their ballot will be delivered and returned in a timely manner. The right to vote should not be hindered by any one or thing.

“I have been in contact with Senator Richard Shelby and Senator Mitch McConnell to see that the right to participate in elections in a safe and efficient manner is protected. Voters can track their absentee ballot online at AlabamaVotes.gov to track the progress of their ballot while in transit. In the meantime, however, we will continue to abide by election dates set out by state law.”

“This is a deeply troubling development in what is becoming a clear pattern of attempted voter suppression by the Trump administration,” Democratic Virginia Gov. Ralph Northam said in a statement. “I am committed to making sure all Virginians have access to the ballot box, and will continue to work with state and federal lawmakers to ensure safe, secure and accessible elections this fall.”

Kim Wyman, the Republican secretary of state in Washington state, where all voting is by mail, said sending fall ballot material to millions of voters there is a “routine operation of the U.S. Postal Service.”

“Politicizing these administrative processes is dangerous and undermines public confidence in our elections,” she said in a statement. “This volume of work is by no means unusual, and is an operation I am confident the U.S. Postal Service is sufficiently prepared to fulfill.”

Meanwhile, the removal of U.S. Postal Service mail boxes triggered concerns and anger in Oregon and Montana. Boxes were also removed in Indiana.

At least 25 mail boxes were removed in mid-July in Montana with another 30 scheduled to be taken away soon, said Julie Quilliam, president of the Montana Letter Carriers Association. She rejected the claim that the boxes were removed because of low usage.

“Some of the boxes scheduled to be removed from downtown Billings are nearly overflowing daily,” Quilliam wrote in a Facebook message.

All three members of Montana’s congressional delegation — two of whom are Republican — raised concerns about the removal of mail boxes around the state in letters sent to Postmaster DeJoy.

Democratic U.S. Sen. Jon Tester demanded an explanation and a list of the boxes removed in the past 30 days.

“These actions set my hair on fire and they have real life implications for folks in rural America and their ability to access critical postal services like paying their bills and voting in upcoming elections,” Tester said.

Republican U.S. Sen. Steve Daines and U.S. Rep. Greg Gianforte, also a Republican, raised similar concerns in letters to DeJoy about the effect the removal of the mailboxes might have on delivery times. All three asked for information on how the agency decided which mail collection boxes to remove and whether any more removals were planned.

“During the current public health crisis it is more important than ever the USPS continue to provide prompt, dependable delivery service,” said Gianforte.

He acknowledged the postal system’s current financial woes but said, “Regardless, balancing the books by slowing delivery and reducing options Montanans have come to rely on gives me great concern.”

People in Portland and Eugene, Oregon, this week were upset that some mailboxes were taken away in flatbed trucks and access to other services were being restricted, Oregonian/OregonLive reported.

“We are not just losing access to roadside mail dropboxes but our convenient neighborhood drop slots,” Jacob Strouckel, a Eugene resident, told the newspaper.

Postal Service spokesperson Ernie Swanson said the Oregon moves were due to declining mail volume and that duplicate mail boxes were taken from places that have multiple boxes. The Postal Service said four mailboxes were removed from Portland this week.

“First-class mail volume has declined significantly in the U.S., especially since the pandemic,” Swanson told the Portland news outlet. “That translates to less mail in collection boxes.” 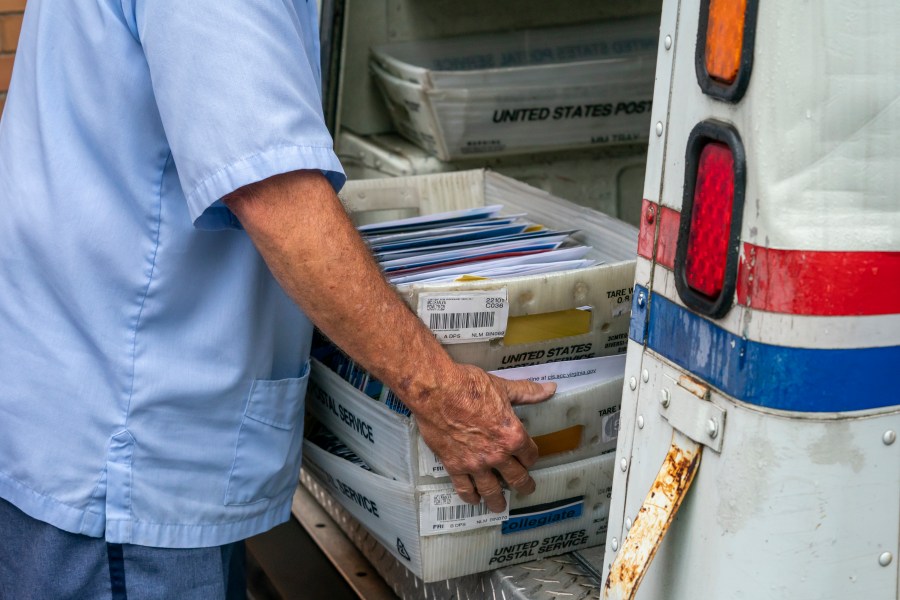