Trick-or-treating is in doubt this year, so Halloween candy is coming early

(CNN) — No, your eyes aren’t playing tricks on you. Halloween candy displays have arrived even earlier this year.

The COVID-19 pandemic, and its potential to put a damper on trick-or-treating and spooky fêtes, has candy manufacturers like Hershey hedging their bets for what is typically their biggest season. That includes dressing up fewer treats in Halloween-specific packaging; putting a greater focus on big-name brands in family-sized packs; and, in some cases, extending the shopping season.

“More stores have started Halloween displays earlier — most have moved up their displays two to four weeks earlier” than the typical mid-August and early September arrival, Stanley said, adding that setting up Halloween displays and aisles earlier can lead to increased sales.

One of the earliest retail movers has been Safeway owner Albertsons, Murphy said.Late last week, a towering candy display — featuring pictures of the M&M’s candy mascots in Halloween costumes as well as boxes filled with large bags of Mars Wrigley and Hershey candies — was seen along the front aisle of a Bay Area Safeway store.

Not all retailers are moving up their Halloween merchandising time frames. Target, Walmart and Walgreens told CNN Business that they would stick with the late-summer and early-fall Halloween candy stocking.

In addition to extending the season, Hershey is trying to shore up sales by limiting the “seasonally dressed” offerings and manufacturing more candy in everyday packaging, Stanley said. This plays well with traditional Halloween trends — more than 55% of Halloween candy is purchased as “treats for me” and for the home and office candy bowls versus explicitly for the purpose of supplying trick-or-treaters, Stanley said. And it also hits on COVID-19 purchasing patterns.

“The category is very resilient in this COVID-19 environment in that people are looking for simple pleasures and a little escape and enjoyment in their day to day,” he said.

And Halloween is being viewed as another escape and an opportunity to add some normalcy and joy to what has been a serious and uncertain time, he said, citing a recent survey conducted on behalf of the confectioners association, which found that 74% of millennial moms and young parents said Halloween is more important than ever this year.

While the survey found that fewer people plan to hand out candy this year, Americans still plan to purchase Halloween candy as they have in years past. The Halloween season, which the NCA defines asthe eight weeks leading up to Oct. 31, accounts for $4.6 billion in confectionery sales each year, according to NCA data.

Those results align with consumer research being conducted by candy makers Mars Wrigley and Mondelez International, the snacks company that makes Oreo cookies and candies such as Sour Patch Kids and Swedish Fish.

Halloween 2020 will look different, said Tim LeBel, president of sales for Mars Wrigley US, adding that families will likely celebrate the holiday in many ways, from traditional trick-or-treating to socially distant events and family movie nights.

Mars Wrigley declined to comment on the timing of its Halloween candy releases.

Mondelez is focusing on best-sellers across its brands in family-size packs for sharing at gatherings rather than large-scale trick-or-treating.

“Our consumer insights indicate that families will be looking to organize Halloween celebrations for their children while also trying to keep them safe, said Iryna Shandarivska, senior category director for US Confections at Mondelez International. “This may mean that Halloween gatherings and celebrations that would have otherwise taken place in person shift virtually and that in-person activities happen in more ‘social bubbles,’ which people have created for themselves in a COVID-19 world over recent months.” 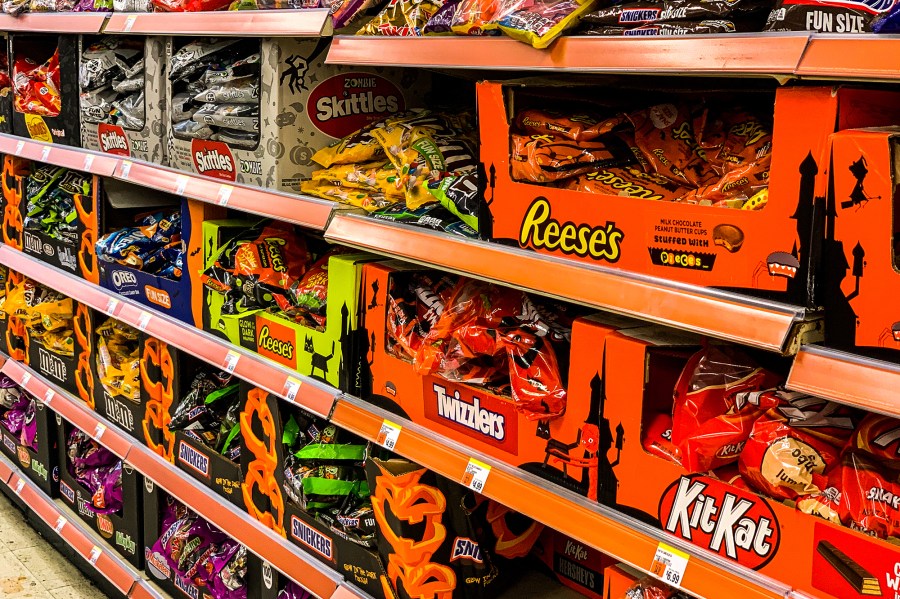