Chris and Amy George set up the fund after one of their twins, Melissa, died shortly after birth. It was when they came home that the George family knew that they wanted to do something.

“When we brought Catherine home from the NICU, Chris and I just knew we were in a position where we could help a lot of people. And we wanted to do something to not only give back to the NICU and help the nurses, doctors, but also to support other families that were going to walk the same road we had,” said Amy George.

Two major fundraisers are held every year for the fund. But due to COVID-19, organizers had to get creative.

Swim For Melissa is an annual non-competitive swim for kids to help raise money. Instead of going to the pool this year, kids participated in a parade.

“We came up with this fun drive-through celebration where the kids would drive-through and get their prizes for all the money they raised. We’ve got teenagers that are going to squirt them with water guns,” she said.

The entrance was lined with balloons and posters of children who were in the NICU but who are now healthy and thriving.

Amy said it was hard to walk away from doing the event how they normally would, but that wasn’t going to sink their goals.

“We can still enjoy life and make things fun and successful. What I’m really proud of with this year’s event is knowing that we were in this time of COVID, we came up with something that’s actually going to help families at this time,” she explained.

Organizers hope to raise enough money to put 55 cameras in the NICU at each child’s crib, so families can be together virtually while having to be apart.

Madison County Sheriff Kevin Turner and deputies went to the event and presented a $20,000 check for the nonprofit. The sheriff’s office started raising the money during last year’s ‘No Shave November’, but they didn’t stop there. They continued to raise money and called it ‘Beards for Babies’. The money will go towards purchasing eight cameras.

After the Swim for Melissa event, Miracle Bash attendees drove through the Miracle Mile. Miracle Bash typically includes a buffet diner and a silent auction. Attendees this year were able to participate in an online auction and take home a gourmet picnic.

Amy calls this a labor of love. She and her family have honored Melissa’s memory so that people don’t forget the true meaning of life.

“What we hope it’s teaching them is that there’s more to life and that there are people who need our help, and we’re called to help them,” she said. 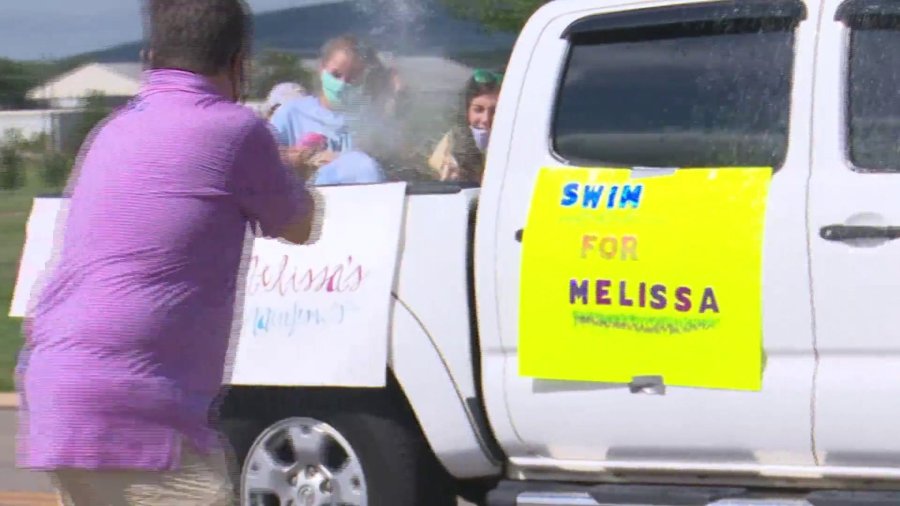