AUSTIN (KXAN) — Gov. Greg Abbott has declared a state of disaster for 23 Texas counties ahead of Hurricane Marco, which is expected to hit near the Texas Gulf Coast early this week — and was classified as a hurricane Sunday afternoon.

These counties include all 22 coastal surge counties as identified by the National Weather Service, in addition to Bexar County — which Abbott says is included for staging and sheltering.

The counties included in the disaster declaration are:

In addition to the state disaster declaration, Abbott is requesting Pres. Donald Trump declare federal emergency in these counties as well.

‘This will help the state meet critical emergency requirements, including evacuation and sheltering,” Abbott said.

The Governor says that as the storms progress, there may be additional needs to expand the counties included in the disaster declaration.

Throughout any evacuation efforts, mitigating the spread of COVID-19 is a top priority, the Governor said.

Abbott explained that the Texas Division of Emergency Management has activated The Alamo Regional Command Center and has ordered 100 buses to arrive at the center on Sunday. Additionally, Texas DPS, Parks and Wildlife and Texas Task Force 1 will all be on hand to assist, Abbott says.

The TDEM, Abbott says, has also activated fuel and hygiene services, based on need during previous hurricanes, like Hurricane Harvey. This is in addition to the activation of resources to shelter at least 5,000 evacuees.

The Texas Department of Health and Human Services, meanwhile, has activated 50 ambulances and has identified two facilities that will be able to cafe for COVID-19 patients during the storms.

The state says it’s preparing for flooding — especially on Interstate 10 near Winnie in Chambers County. I-10 in this region, Abbott says, can become submerged during flooding.

Abbott says it appears both Marco and Laura will cross paths at Texas’ border with Louisiana.

In addition to Marco, the state is also preparing for Laura’s intensifying into a Category 3 hurricane, with TDEM Chief Nim Kidd saying the Texas gulf region could see up to 15 inches of rain.

“It’s incredibly important for everybody who could be in the pathway of these storms to constantly heed local warnings about what may be happening in your community,” said Abbott. “There could be rising water very quickly.”

Abbott says Texas is working with FEMA to respond to the oncoming hurricanes — which come during an already precarious time in Texas.

“As we respond to these oncoming hurricanes, it is essential that everybody in every community continue to do everything that you can to maintain your distance from others. To remember the safety practices that you have adopted over the past few months, that is to wear a mask, to sanitize your hands. To use all the strategies that now have proven to be so successful in Texas.” 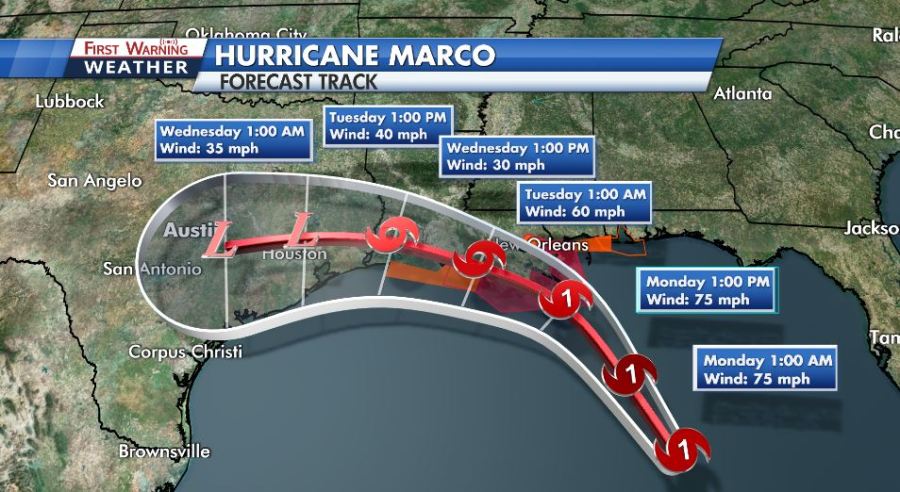