Takuma Sato wins the 104th Running of the Indianapolis 500

INDIANAPOLIS — Luck can change in a heartbeat at the Indianapolis Motor Speedway.

It appeared Takuma Sato would hold off Scott Dixon with just a few laps remaining, but a crash involving Spencer Pigot eliminated any drama. Sato, the 2017 champion, won the race under caution at a fan-free Indianapolis Motor Speedway.

It looked like an exciting finish with Sato, Scott Dixon and Graham Rahal battling down the stretch, but Pigot’s crash brought out the yellow flag. Race officials decided not to red flag the race, ending the Greatest Spectacle in Racing under a caution flag.

“This is unbelievable,” Sato said after the race, adding that he knew Dixon was bearing down on him. He chose 2% milk for his post-race victory drink.

It was the third time Dixon has finished the 500 in second place. He congratulated Sato, saying the Japanese driver “drove his pants off” to get the win.

Early incidents in the race took out Marcus Ericsson and James Davison. The first incident of the day involved veteran driver Ed Carpenter, who brushed the wall and couldn’t recover to become a factor during the race.

The scariest moment of the race came after a caution flag that ended Dalton Kellett’s day–Conor Daly and Oliver Askew were involved in a frightening crash, with Askew hitting the wall hard. That led to another caution flag.

Dixon looked good early on, leading from the first lap until he pitted during a caution around lap 29. He regained the lead about a quarter of the way through the race. Just past the race’s midway point, Dixon and Alexander Rossi passed the lead back and forth in an effort to conserve fuel.

Rossi ran into trouble of his own, making contact with Sato during a pit stop and being assessed a penalty that sent him to the back of the field. He tried to make his way back into contention but crashed on lap 144, ending his day.

Dixon remained one of the front-runners throughout the race, ceding for a while to Sato, who seized the lead late and held on. 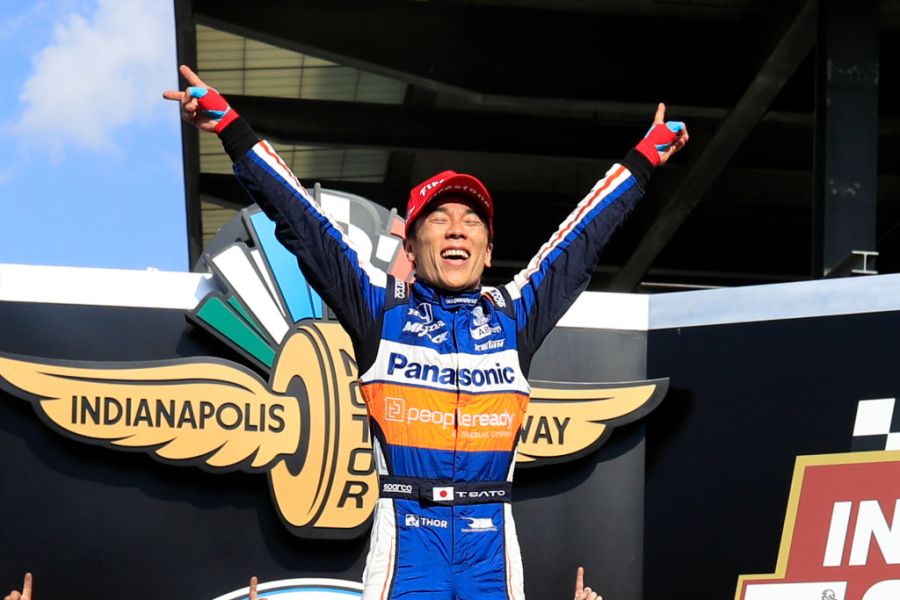