Tropical Storm Laura is dumping “torrential rainfall” across much of southern Hispaniola, according to the National Hurricane Center. The area Laura is moving over is quite mountainous and will slow any strengthening through Monday.

As of the 8 a.m. Sunday advisory, Laura is moving WNW at 18 mph with maximum sustained winds of 45 mph.

Hurricane warnings are being issued along portions of the northern Gulf Coast as Tropical Storm Marco approaches hurricane status. Marco beat Laura to the Gulf of Mexico Saturday evening and will stay ahead of Laura through its lifespan. Any interaction between the two storms will keep both of them weaker. However, the latest timing of the storms do not bring them close enough for any interaction.

According to the 8 a.m. Sunday advisory, Marco is moving through the Gulf of Mexico about 360 miles south southeast of the Mississippi River. It’s moving north northwest at about 13 mph with maximum sustained winds of 70 mph.

Marco will likely reach the Gulf Coast Monday afternoon as a category 1 storm making landfall somewhere along the Louisiana coastline.

Laura will follow right behind Marco and potentially make landfall near the same location as Marco, just a few days later. Laura is expect to stronger than Marco at landfall and the current forecast brings it onshore as a category two storm with winds of 100 mph.

The forecast models have better confidence on a northern Gulf Coast landfall for both storms Sunday morning but trends will still need to be watched all week, especially for any changes with Laura’s forecast. 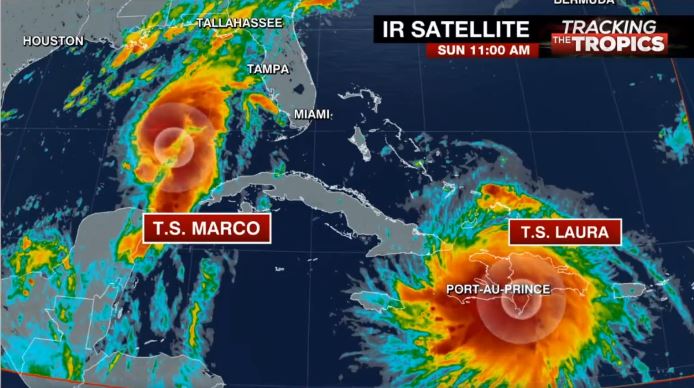