HUNTSVILLE, Ala. – The City of Huntsville saw its first campaign stop by a 2020 presidential candidate Sunday afternoon.

“I believe that every gun law in the last 100-years should be gotten rid of,” Jorgensen said. “I also think we should keep red flag laws from being instituted because, again, that’s taking away constitutional rights without trial.”

Jorgensen used a speaker system to project her voice to the crowd. However, it came at a cost.

Organizers said they didn’t secure a permit because they did not get their application submitted in time. Tom Hopf, a candidate for Huntsville City Council District 5 said he was cited. Jorgensen did use the speakers and that in turn violated Huntsville’s noise ordinance. Hopf invited Jorgensen to Huntsville and took the citation as the organizer of the campaign stop.

“We’ve had very amicable conversations all day (with HPD). Mutual respect. They (the officers) are doing the job they are told to do. That’s one of the reasons I’m running for city council because they are doing what legislature is telling them to do. I want to tell them to leave police alone,” said Hopf.

On the subject of police reform, Jorgensen said local law enforcement is leaning too heavily on federal assistance for tools like heavy machinery and gas.

As for COVID-19, Jorgensen said had she been president, she would cut FDA red tape while encouraging mass testing for all instead of just for people showing symptoms. She disagreed with how President Trump has handled the situation.

“Southeast Asia was quickly able to get ahead of it by testing everybody,” Jorgensen said.

The first thing she said she would do as president would be bringing all U.S. military forces back home to focus on internal protection while building relationships with our neighboring countries.

“Maybe if they paid for their own military and the citizens of Alabama weren’t sending their tax dollars over to France to pay for their military, maybe we could get five-week vacations too,” Jorgensen said.

The Libertarian candidate also said she believes in open borders as the party believes immigrants play a vital role in the economy.

One resident at the rally expressed frustration in the two party system.

“It’s shameful. Truly shameful. We the people truly deserve better government than we are getting,” said Richard Clary, a Decatur resident.

Jorgensen said if every American voted with their conscience, Libertarians would be more involved on ballots everywhere. 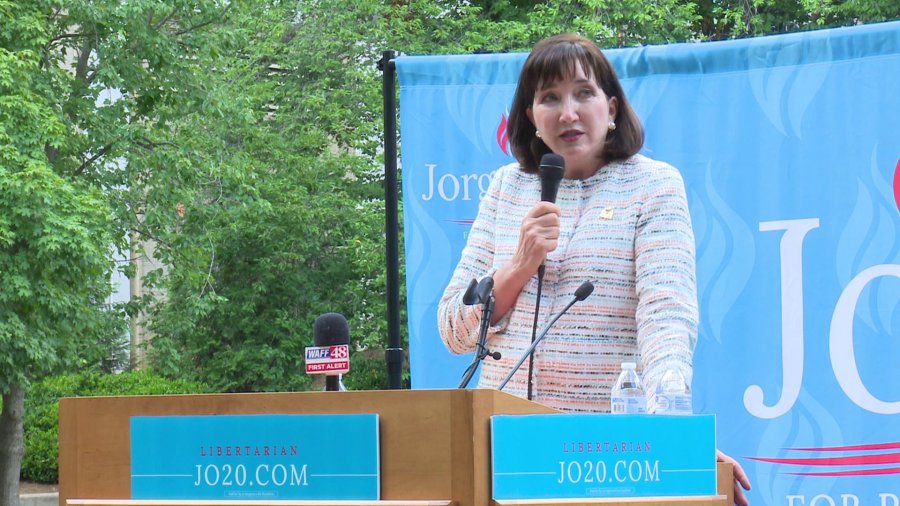