ALBUQUERQUE, N.M. (KRQE) – Wildfires are ablaze across California, Colorado, Arizona, New Mexico and several other states, and the smoke from these fires will be noticeable from coast to coast.

Almost one million acres of land have burned or are burning in California as of Aug. 24. Two of the largest fires in California started about a week ago. The LNU Lightning Complex Fire has burned 351,817 acres in Napa, Sonoma and Solano counties and is only 25% contained as of Aug. 25. Meanwhile, the SCU Lightning Complex Fire is only 15% contained, burning 360,055 acres throughout Santa Clara, Alameda, Contra Costa, San Joaquin, and Stanislaus counties.

Immense amounts of smoke started drifting into the Pacific Northwest, Idaho, Montana, Nevada and Wyoming last week. The jet stream has now broadened, and it’s carrying that smoke all the way to the Midwest. The smoke will make it to New England by Tuesday evening. Below is a projected map of Near-Surface Smoke by 5 PM E.D.T, Aug. 25.

The smoke is also curling around a high-pressure system that is over the southwest U.S. Besides the California wildfires, there are numerous other fires burning across the west that are attributing to the smokey atmosphere.

The image below shows all of the wildfires burning in the western U.S. and the resulting smoke plume shaded in grey. The air quality is moderate for most of the west, including Colorado, New Mexico and Arizona. As the smoke plume drifts east, air quality will lower for the Plains and Midwest. Smokey air and increased ozone have negative effects for anyone with asthma, breathing problems and COVID-19.

Severe and extreme drought conditions can be blamed for the intense wildfire season. Short-term and long-term drought has taken over most western states. No major seasonal changes are expected. A La Nina watch is in effect and may leave the west on the drier side this winter. 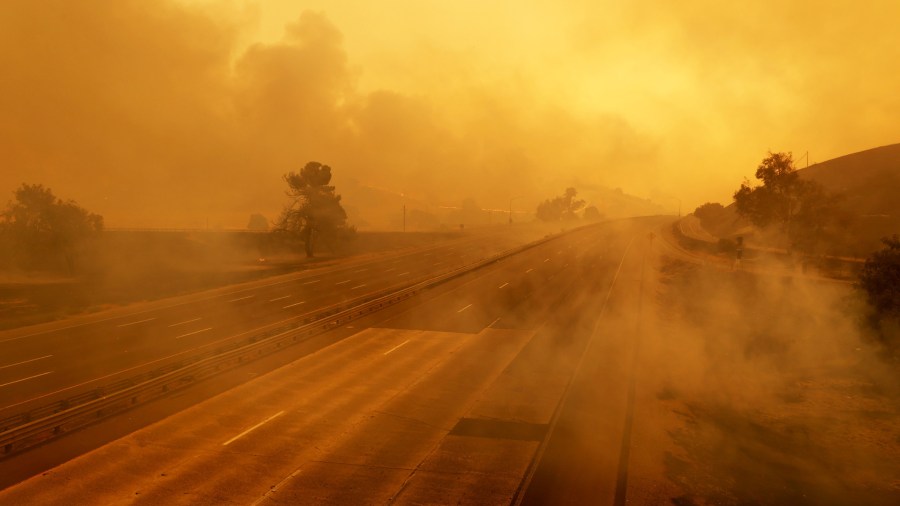