McALLEN, Texas (Border Report) — The South Texas land where a 3-mile controversial private border wall was built earlier this year has been valued at $20.2 million, which has resulted in an estimated tax bill of nearly half a million dollars that would substantially boost the county and school district’s tax rolls, according to documents obtained exclusively by Border Report.

The Hidalgo County Appraisal District sent a letter to the landowner, sugar cane farmer Lance Neuhaus, of Neuhaus & Sons, advising him that his property south of Mission, Texas, has been valued at millions more than the previous year because of the private border wall structure. The appraisal district estimates that Neuhaus owes $434,773 in 2020 property taxes for the two plats of riverfront property on which he allowed Fisher Sand & Gravel to build the private border wall in January.

The taxes due are up astronomically from the 2019 valuation of $272,000 for the two plats of property before the private wall was built, according to the 2020 tax appraisal documents sent to Neuhaus.

The amount increased so much that the Hidalgo County Appraisal District, which establishes the market value for all properties within the county, prepared an eight-page “Border Wall Analysis” booklet and sent it to the property owner with the new market valuations.

The increased property value is based on news reports that the border wall being constructed in the Southwest by the Trump administration costs about $20 million per mile. The Hidalgo County Appraisal District discounted that by 20% based on local economic factors, Jorge Gonzalez, assistant chief appraiser for Hidalgo County told Border Report on Tuesday afternoon. The assessed amount also was based on total border wall miles and structure that had been built as of Jan. 1 on the property, which Gonzalez said was only 38% of the total project that was later completed.

“That is the net rate of $16 million per mile because of the border wall structure they put up,” Gonzalez said.

Additionally, the appraisal district reclassified the land from agricultural to “commercial,” documents show.

The tax appraisal information was sent to the Neuhauses earlier this year and they did not appeal during the May-June time frame and the tax rolls have already been certified, Gonzalez said. The money is due by Jan. 31, 2021, to the Hidalgo County Tax Collector’s Office, which is a separate entity from the tax appraiser.

The property owners will have additional time to appeal to the appraisal district beginning in September, Gonzalez said.

Hidalgo County Judge Richard Cortez confirmed to Border Report that the appraisal district independently assessed this tax amount to the farmer, but Cortez said the county would reap the benefits from receiving much more in taxes, if the money were to be paid.

“It’s a lot of money,” Cortez said. “The appraisal district did that. I’m not happy that the wall is there for so many reasons, but I’m happy that they’ll pay taxes on it.

“I think it will help with future endeavors for people to understand that if they put up a structure like this they’ll be assessed taxes on it,” Cortez said.

“Wow, it’s nice to get something. It’s just not the way our county would have expected it,” South Texas College Board of Trustees Chairman Paul Rodriguez told Border Report on Tuesday afternoon. “I’m flabbergasted. My reaction is disbelief and if it ends up sticking and they have the capacity to pay those taxes then every dark cloud has a silver lining but that’s certainly not the way we’re wanting our tax rolls to be enhanced by a border wall.”

If the private border wall is still standing on Jan. 1, 2021, then next year it will be assessed at the full 100% valuation, not just 38%, Gonzalez said. Construction of the private border wall had been held up in federal court and Tommy Fisher, CEO of Fisher Sand & Gravel, which built the structure, did not start building it until mid-January after a federal judge lifted a restraining order that had restricted construction.

By comparison, La Plaza Mall is valued at $200 million, and has one of the highest tax appraisals in the county.

Federal lawsuits against the private border wall are still pending in the U.S. District Court for the Southern District of Texas in McAllen. The U.S. Justice Department, on behalf of the International Boundary and Water Commission, has filed a lawsuit alleging the structure violates an international water treaty with Mexico. And the neighboring nonprofit National Butterfly Center and its director also have filed a defamation lawsuit against Fisher and others involved in the construction of the private 18-foot-tall wall that is made of galvanized steel and is gray in color and shorter than border wall being built by the federal government. The next hearing in the lawsuits is scheduled for Sept. 10.

Marianna Treviño Wright, executive director of the National Butterfly Center in Mission, told Border Report that this is just the latest news associated with the private border wall structure to discredit it. Last week, an indictment was handed up against the organization We Build The Wall alleging they defrauded the public to crowdsource online and raise $25 million for the private border wall in South Texas, and one segment built in New Mexico, yet the organization allegedly misspent much of the funds.

“It just makes sense that if you’re going to put a $40-plus million project on a piece of land that the tax assessment should go way up and we’re happy that our local college and Mission ISD and others will benefit from this,” Treviño Wright said. “When you go on the record saying you spent $42 million on something, you’re going to be taxed on it.”

Fisher has told Border Report that the 3 miles of private border wall in South Texas cost $42 million to build and he personally financed $22 million. We Build The Wall gave him less than $2 million toward the structure and gave $8 million toward the segment built in Sunland Park, New Mexico in 2019.

Treviño Wright said documents she and her lawyer received from the court regarding the lawsuit show that Fisher has “indemnified Neuhaus for the property,” she said. However, she said the documents were highly redacted and it is uncertain how much money Fisher paid Neuhaus to be allowed to build the border wall on his section of riverfront proper just a few hundred yards across from Mexico.

Fisher has told Border Report that he leased the riverfront edge of the property for the structure, but no documents showing the lease transaction have been shared. Border Report reached out to Fisher for comment and will update this story if information is received. 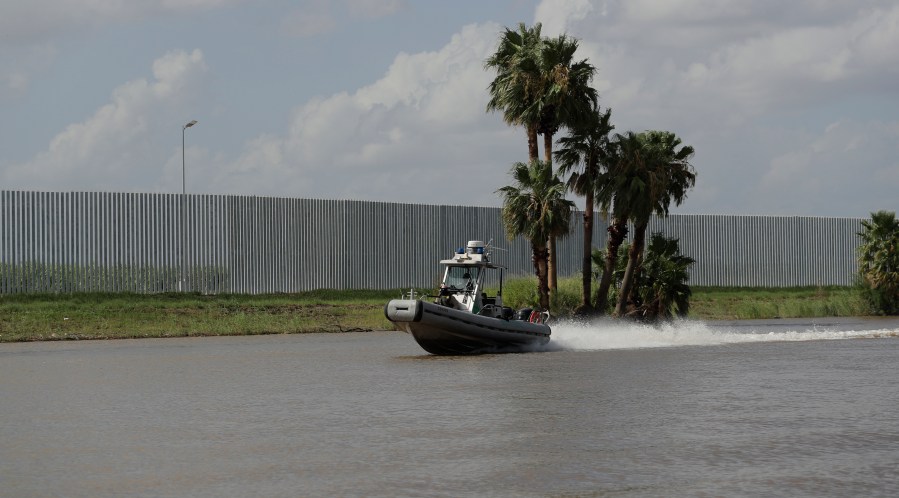