PORTLAND, Ore. (KOIN) — One person was shot and killed near clashes between supporters of President Donald Trump and counterprotesters on Saturday night during a “Trump 2020 Cruise Rally” that started earlier in the afternoon in the Portland area.

KOIN 6 News witnessed two men yelling and having an altercation near SW 3rd and Alder around 8:45 p.m. Someone sprayed mace and then someone pulled out a gun. KOIN 6 News heard shots fired. A wounded man was seen on the ground and the suspect took off running, according to witnesses.

Police confirmed just before 9:30 p.m. that the victim, who was shot in the chest, had died and a homicide investigation was underway.

Photos from Getty Image’s Nathan Howard show the victim wearing a Patriot Prayer hat; however, it is unclear what connection the victim has to the group.

A witness tells KOIN 6 News groups of pro-Trump protesters and counterprotesters were getting heated with each other just before the shooting. A spokesperson for Mayor Ted Wheeler said the mayor plans to address the incident on Sunday.

Traffic has been heavily impacted in parts of downtown Portland as a result of the original rally and demonstrations against it, according to police, and people are being asked to avoid the area. It’s unclear how many arrests have been made.

Hundreds of people had gathered Clackamas Town Center parking lot by 4 p.m., flags waving from the back of their pickup trucks. Counterprotesters faced off with Trump supporters, and someone used pepper spray at one point, according to New York Times reporter Mike Baker.

The Clackamas County Sheriff’s Office tweeted that people should expect traffic delays and avoid the area if possible.

Many demonstrators said they were fired up after the Republican National Convention and wanted to come out and provide a counterpoint to the other protests that have been happening in Portland for the past three months.

“I’ve been fortunate to live through and vote in several elections,” Mark Claiborne said. “I can’t remember a time where the difference between the two ideologies and platforms were so diametrically opposed.”

The crowd soon grew to the low thousands. Around 5:30 p.m., members of the group started the cruise portion of the evening, making their way toward Portland. The route was not announced ahead of time, but hundreds of cars and trucks streamed across the Morrison Bridge into downtown Portland.

Organizer Alex Kyzik posted a video on Facebook ahead of the rally asking people to not open carry at the event, citing “security reasons.”

“This event is concealed carry only,” he said in the video. 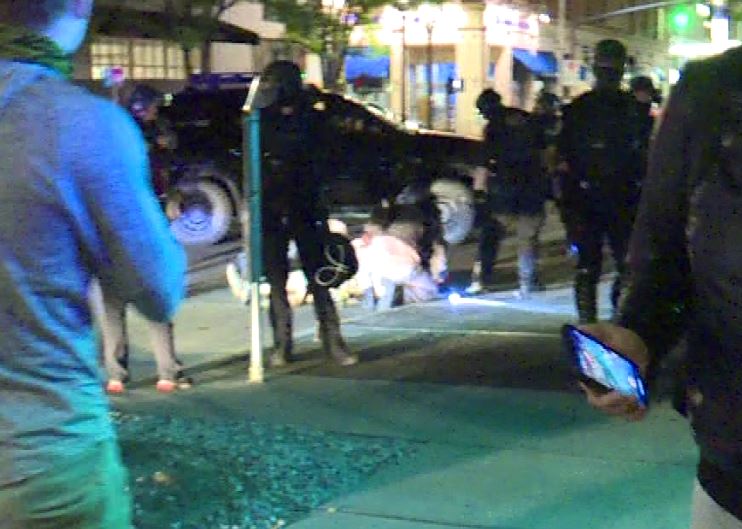