EDITOR’S NOTE: One of the hurricane names was misspelled. This has been corrected.

NEW ORLEANS, LOUISIANA–Approximately 800 homes were destroyed during Hurricanes Katrina and Rita in 2005. Today New Orleans looks back 15 years ago. So many of us evacuated west during that time, and today our neighbors and family from Lake Charles are starting to return back home after Hurricane Laura did her worst.

In the years after Hurricane Katrina, the incredible undertaking of bringing so many displaced people back to their home city is till going on today. The 9th Ward community in New Orleans lost 100 percent of the homes during 2005. Margueritte Oestreicher is Executive Director of New Orleans Area Habitat for Humanity and says “particularly here in the 9th Ward where we had some of the highest percentages of home ownership among African Americans in the city.  So providing the opportunity for people to return home continues to matter.  It is relevant.”

A dire situation is at hand that started after Hurricane Katrina and is now exacerbated during the coronavirus pandemic. New Orleans’s iconic places are in danger and without it’s original residents, characters and culture bearers, the city is changing. As a counter to the fight of keeping NOLA culture alive, today, there are over 70 homes built by Habitat for Humanity in musician’s village in the the Upper 9th Ward, a place where over the years, culture bearers have reestablished themselves.

Starting back in 2006, 200,000 volunteers were part of Camp Hope, a FEMA sponsored partnership of non profits who rebuilt the homes lost in Katrina’s waters. Habitat for Humanity went from building eight to ten houses a year to building over 200 houses in 2007.

Margueritte Oestreicher was one of the many New Orleans residents displaced after the storm and she lost everything. In 2014, she returned to New Orleans and redirected her life to become the executive director of the New Orleans Area Habitat for Humanity.

“I can very vividly remember in the weeks and months after the storm when I was relocated after state and I was the first Katrina person people had met.  I was here for the 10th anniversary after Katrina and the international media kept asking how New Orleans’ recovery was not done.  Quite frankly, the work is still not done,” says Margueritte.

Across the the city, there are close to 700 homes that have been built under the New Orleans Area Habitat for Humanity. Additionally, over 2,000 homes were cleaned up by Habitat for Humanity since Hurricane Katrina. Louisiana deals with storms; that much is clear. When the storms of life tear you down, the only solution is to use faith, brick and mortar to build yourself back up.

“It’s been an extraordinary journey for this community and this organization, to recognize that when people who care step up and pull together to make change, anything can happen. That is Habitat’s role is to provide home ownership, stability and quite frankly… hope,” says Margueritte Oestreicher. 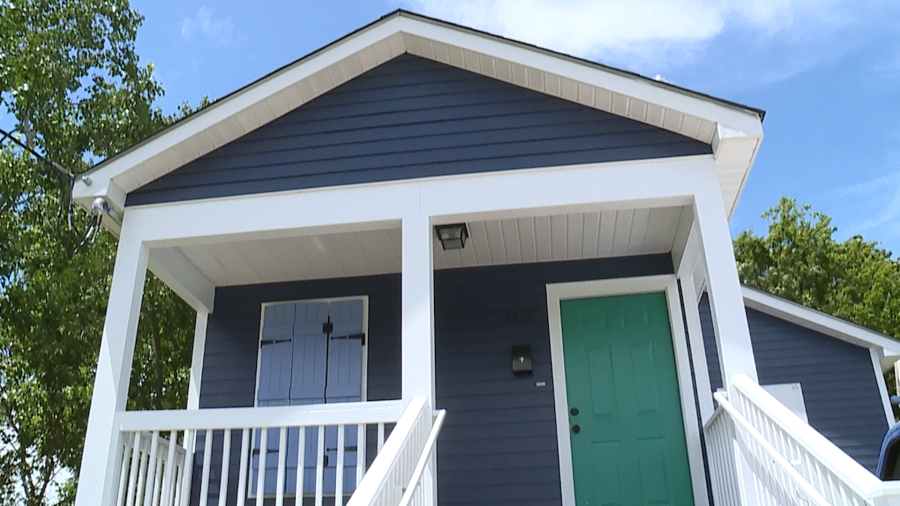