A few of the morning storms may have gusty winds and frequent lightning, however these storms should dissipate shortly after sunrise.

Sunday afternoon looks a lot stormier. Some storms could even be strong, capable of torrential downpours, small hail frequent lightning, and gusty winds.

The Storm Prediction Center has outlined an area of “marginal” risk of severe weather on Sunday. While an isolated thunderstorm or two could briefly reach the “severe” limits (ie, wind gusts 58+ mph or hail the size of a quarter or larger), a widespread severe weather threat is not likely on Sunday afternoon, though flash flooding could occur in areas that receive heavy rainfall in a short amount of time.

Another round of severe weather Monday?

The Storm Prediction Center has placed portions of north and central Alabama in a Marginal to Slight Risk of severe weather on Monday. This means that thunderstorms are in the forecast, and a few storms have the potential to produce wind gusts as high as 58 mph or greater.

A cold front surging south through the Tennessee Valley will produce strong uni-directional speed shear from the surface of the ground to higher aloft in the atmosphere. This uni-directional shear usually indicates a straight line wind threat, where thunderstorm winds fan out in all directions rather than spinning up, like a tornado.

Straight line winds have the potential to produce structural damage to trees and buildings, so this wind threat should be taken into consideration. Thunderstorm wind gusts as high as 50-60 mph are possible in north Alabama, particularly in the counties shaded in red in the graphic above.

In addition to the wind, heavy rain within the thunderstorms may produce rainfall amounts as high as 1-2″ at a time. North Alabama has already received copious amounts of rain over the past week, which means any additional heavy rains may prompt a flash flood threat.

Track heavy storms with WHNT.com’s Interactive Radar or swipe over to the radar feature on Live Alert 19! You can also get up-to-date, location-based alerts wherever you are on Live Alert 19. Download it today for iOS and Android. 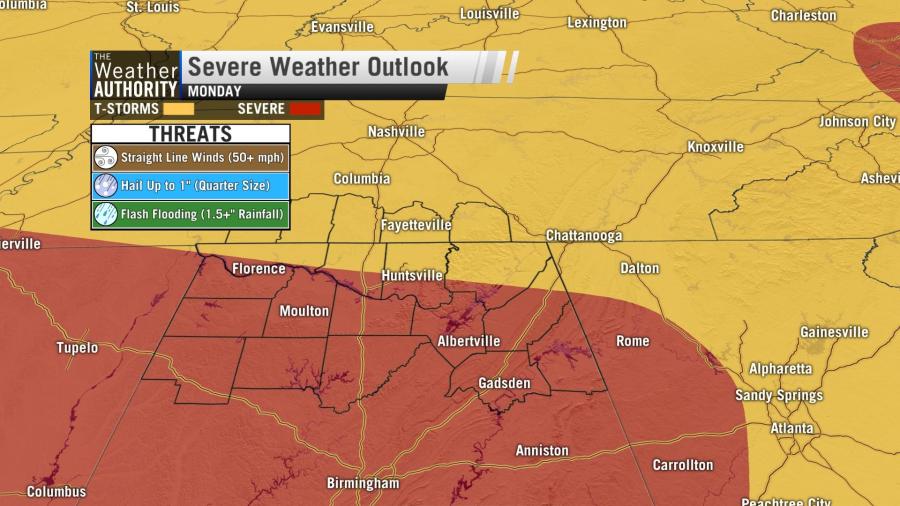