ROCHESTER, N.Y. (NewsNation Now) — Video of a Black man who died of asphyxiation seven days after being handcuffed, spit hooded and pinned down by police was released Wednesday as activists demanded the officers be fired and charged in his death.

Daniel Prude died March 30 after he was taken off life support, seven days after the encounter with police in Rochester. Police body-camera video of the arrest was only released Wednesday. The city halted its investigation into Prude’s death when state Attorney General Letitia James office began its own investigation in April.

The family of Daniel Prude intends to file a wrongful death lawsuit against the City of Rochester, and the New York State Attorney General is actively investigating the case.

Activists say Prude was lying on the ground — naked, handcuffed, and unarmed on March 23. They say police put a bag over his Prude’s head and pushed it into the ground. They say less than 10 minutes later, Prude was unconscious. He was hospitalized, put on a ventilator, and then, according to the autopsy report, he was officially pronounced dead seven days later.

That autopsy report from the Monroe County Medical Examiner’s Office ruled the death of Prude as a homicide. The report says Prude’s cause of death includes “complications of asphyxia in the setting of physical restraint.”

Video of the incident surfaced Wednesday when Black Lives Matter activists gathered outside City Hall to call for the immediate firing and prosecution of the officers involved — officers who have not been suspended.

The videos show Prude, who had taken off his clothes, complying when police ask him to get on the ground and put his hands behind his back. Prude is agitated and shouting as officers let him writhe as he sits on the pavement in handcuffs for a few moments as a light snow falls.

Then, they put a white “spit hood” over his head, a device intended to protect officers from a detainee’s saliva. At the time, New York was in the early days of the coronavirus pandemic.

Prude demands they remove it.

Then the officer’s slam Prude’s head into the street. One officer holds his head down against the pavement with both hands, saying “stop spitting” as Prude’s shouts turn to whimpers and grunts. Another officer places a knee on his back. The officers appear to become concerned when they notice water coming out of Prude’s mouth.

Prude stops moving and falls silent. One officer notes that he’s been out, naked, in the street for some time. Another remarks, “He feels pretty cold.”

His head had been held down by an officer for just over two minutes.

Medics can then be seen on the video performing CPR before he’s loaded into an ambulance.

Prude was from Chicago and had just arrived in Rochester for a visit with his family. Police responded after Joe Prude called 911 to report that his brother had left his house and was experiencing mental health issues.

“I placed the phone call for my brother to get help, not for my brother to get lynched,” said Joe Prude, the brother of Daniel Prude. “When I say get lynched, that was full fledged, murder, cold-blooded — nothing other than cold-blooded murder. The man is defenseless, naked on the ground, cuffed up already. I mean come on, how many brothers got to die for society to understand that this needs to stop? You killed a defenseless black man, a father’s son, a brother’s brother, a nephew’s uncle.”

“Rochester Police Department was called and that response led to his murder,” said activist Ashley Gantt, who is also an organizer for NYCLU. “The police have shown us time and time again that they cannot address mental health crises. Today we stand firmly seeking justice for Daniel and his family, and all the victims who have been murdered and terrorized by the Rochester Police Department.”

Elliot Shields, the attorney representing the family, says the notice of claim has been filed with the city, the first step to proceed a wrongful death lawsuit.

“We’ll address the legal claims later, today we’re here to support the family,” said attorney Elliot Shields who represents the family. “We’re here to support Joe, and all that I can tell you is what Joe is going through, what his father is going through, what his sisters going through is incredible pain. I watched the video with them and it was one of the most difficult experiences of my life. Watching the family react to see their brother and son murdered by Rochester police officers while other officers stood around, paramedics, EMTs and nobody granted him any basic humanity. And the pain that causes the family is unimaginable. I can’t even imagine what Joe is going through and I talk to Joe all the time. Its just terrible and that’s why were here today.”

As a result of an executive order from Gov. Andrew Cuomo in July, New York State Attorney General Letitia James will investigate all cases where law enforcement officers are involved in the deaths of civilians.

“I know on March 23 they [Prude’s family] did everything possible to make sure that their loved one was taken care of,” Mayor Warren said. “They took him to the hospital, they tried, they called and they sought the help that they needed. Unfortunately something tragic ended up happening ,and losing a loved one is never easy for anyone. On behalf of the citizens of Rochester I do extend my deepest condolences.

“Once Mr. Prude passed away, the Rochester Police Department turned the case over to the Attorney General’s office and since that time we have been waiting for the Attorney General’s office to make a determination on how this case is to proceed,” Mayor Warren said. “The reason why that is the case is because we want to make sure the investigation is fair, unbiased — something people have confidence in — and that the entity that is being investigated in not the entity that’s conducting the investigation.

“Unfortunately it has taken some time and I sympathize with the family because I too, when I saw the video, was very disturbed,” Mayor Warren said. “In this particular instance, this is not within our control. It’s not within our control fairly, because the executive order outlines that this case has to be handed by the Attorney General’s office.

“At no point in time did we feel that this was something that we wanted not to disclose,” Mayor Warren said. “It is always something that we want to be forthright, up front about with our citizens — whether we’re talking about what happened with Mr. Pate, or what happened with Trevyan Rowe, or any other citizen in our city. I have been first to come forward and stand with our citizens and let them know the process going forward. In this particular case, this is handled by another agency. Unfortunately it is now September 2 and we do not have a report from the AG’s office.”

“Rest assured that we are going to do everything possible to make sure that the truth comes out and that justice is held here,” Mayor Warren said. “The video I understand is very disturbing, it’s very disturbing, it breaks my heart as well, but we have to follow the process that has been laid out by executive order 147.”

The chief echoed statements that his department is cooperating.

“Anytime you have an in-custody death it is taken serious, hence why I ordered, that morning on March 23 after the arrest, a criminal investigation which is conducted by our Major Crimes Unit as well as an internal investigation conducted by our professional standards sections,” said Chief Singletary. “On March 23 I did contact DA Sandra Doorley, and asked her to take a look at the situation as well. On April 16 we were notified New York governor’s executive order 147 that they were the entity that had authority over the death of someone in custody.”

To reiterate, at this time, the officers involved have not been suspended.

“This is not a cover up. There is no cover up whatsoever,” Chief Singletary said. “We’re going to take a look at this criminal investigation. The internal investigation looks at whether the officers violated policy and procedures of the Rochester Police Department. From day one we have been in conversation with the investigating authorities as such. Like the mayor said we don’t have a problem holding anyone accountable. At this particular point in time, that’s why I’m waiting for the investigation to unfold to determine what the next step will be.”

“The death of Daniel Prude was a tragedy, and I extend my deepest condolences to his family. I share the community’s concerns about ensuring a fair and independent investigation into his death and support their right to protest. Pursuant to Executive Order 147, the Special Investigations and Prosecutions Unit of my office is already actively investigating this incident. As with every investigation, we will follow the facts of this case and ensure a complete and thorough examination of all relevant parties. We will work tirelessly to provide the transparency and accountability that all our communities deserve.”

NewsNation affiliate WROC and Associated Press contributed to this report. 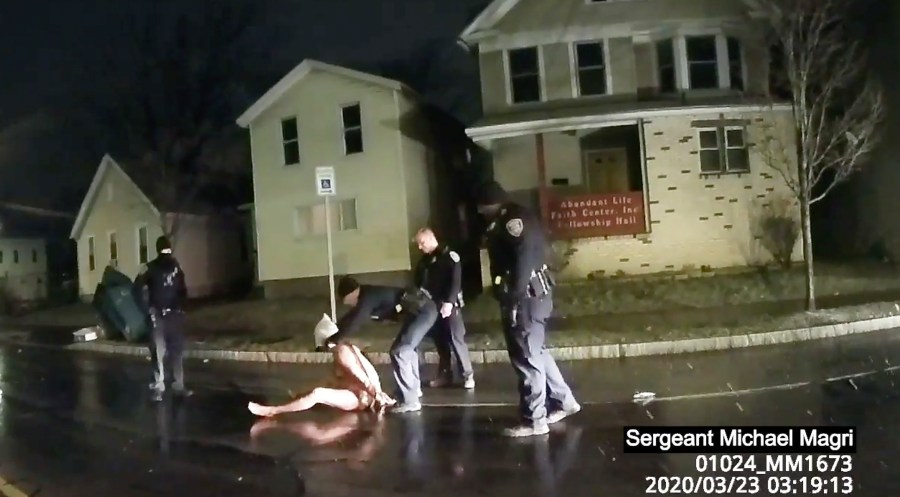