Most polls show Biden leading nationally, but the race is expected to come down to handful of battleground states.

News 19 Political Analyst Jess Brown said people are dug in for and against President Trump. Biden is obviously his opponent, but Brown said the race is really about Trump and which candidate can secure the remaining undecided bloc of independent voters.

Brown said there is plenty of polling data that defines where the race stands and which voters remain uncommitted.

“The president is going to get 42 percent of the vote if he has a pulse,” he said. “There’s also polling data that suggests that about 46 percent of the electorate will vote against President Trump if they have a pulse.”

That leaves about 12 percent of the electorate.

Brown said the planned presidential debates could make an impact, but they also could prove to be troublesome for the president.

“It will be very interesting in such a high-profile setting,” Brown said. “What will President Trump’s demeanor be? I’m sure his own pollsters have told him, ‘Mr. President, just be a nice guy. Just show some degree of humility and empathy and it’ll help you a lot. It’s your big ego that causes you a lot of your problems. Moreso than your particular agenda about border security and those things.’

“And if he shows up at those debates and he is very non-presidential in style, and he is the proverbial big-ego bull in the china shop, I think these debates are going to be disastrous for him, because I think independent voters … Republican base will love it and the Democratic base is already not going to vote for him … but I think independent voters would like a president who acts presidential.”

Brown said if Trump shows up to the debates reasonably informed on the issues and shows some degree of empathy, and that he’s learned some lessons, he will benefit.

“A little humility would go a long way for this president, because I’m convinced there are some independent voters that aren’t necessarily comfortable, they’re not begging to elect Joe Biden president.”

Brown said independent voters seem to have two major concerns about Biden: his age and his health, and whether even though he is running as a moderate that, if elected, he will govern from a more left-leaning point of view.

President Trump will have a difficult time making the age and health questions an effective issue, Brown said, because questions have also been raised about the president’s health.

The second issue may resonate more, Brown said, with voters concerned Biden may feel beholden to the left-leaning wing of the party.

“The fear of independent voters is moderate Joe Biden will inevitably, as President Biden, become a captive of what they view as an extreme liberal left-wing element of his party,” Brown said.

Biden appears aware of this concern, Brown said, and has in recent days done some things to give himself “some protection” related to that fear, including condemning violence during protests and saying he won’t ban fracking.

The Trump campaign will seek to focus on that concern of voters, Brown said.

“But, here again, at this point, Biden’s really not the issue, it’s a referendum on Donald Trump.” 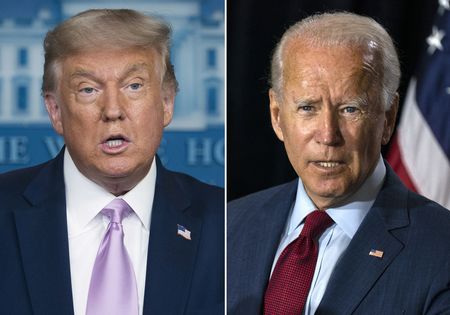