Rallies continue for, against Confederate flag removal in Marshall County

ALBERTVILLE, Ala. – Two groups are fighting for racial equality in Marshall County continuing their push to have the Confederate flag removed and the monument relocated.

Say Their Names Alabama was joined Wednesday night by Project Say Something out of Florence.

“In a place that’s supposed to be the public eye representing justice for all and to be flying a flag that very so clearly does not stand equally for all, that is completely inappropriate,” said event co-organizer Julie Roden.

They started the event with an “open conversation” between themselves and counter-protesters from the Sons of Confederate Veterans.

“My relatives fought for the Confederacy. Three of them fought and died. I think we should honor them. I believe in this great flag, Confederacy flag,” said Sons of Confederate Veterans member Bill McClendon.

Near the end of the discussion, things got heated. Counter-protestors used racial slurs, which triggered and upset some of the people there hoping the Confederate flag will be removed.

Both sides continued the conversation through chants during the rally.

But the discussion has not even begun for Marshall County commissioners.

Commissioners heard from the great-great-granddaughter of a Confederate soldier during the bi-weekly meeting.

“To some in our community, it appears to bring pride to their heritage,” said Albertville resident Brandi Loveland.

The mother of three and small business owner supports the flag’s removal and the monuments’ relocation.

“To support the flag based on the idea that it represents Southern heritage is to do so at the expense of the estimated 13 million Africans who were carried on slave ships to the United States before slavery was abolished. The Confederate flag trivializes the heritage of many of the members of our community who are descendants of those 13 million. Letting these symbols be and letting there be public representation of white supremacy in front of a government building in our community is not ok.  It’s 2020 and we all know better, so it’s time for us to do better,” explained Loveland.

Commission Chairman James Hutcheson told News 19 he had not heard any complaints about the Confederate symbol until recently.

But despite the new backlash and rallies, he and comissioners still have not discussed keeping it or moving it.

Here is his response when asked at what point will you discuss it: “I wish I had an answer for you, but I have no idea. You’ve got the monument, which has the Confederate flag on it, so I don’t know if that taking down the flag itself would solve the issue. So, as of right now, no discussion and no discussion planned on it,” said Hutcheson.

The removal of Confederate relics like the flag and monuments has been a hot topic since the summer after the death of black men and women at the hands of white police officers, including George Floyd and Breonna Taylor. 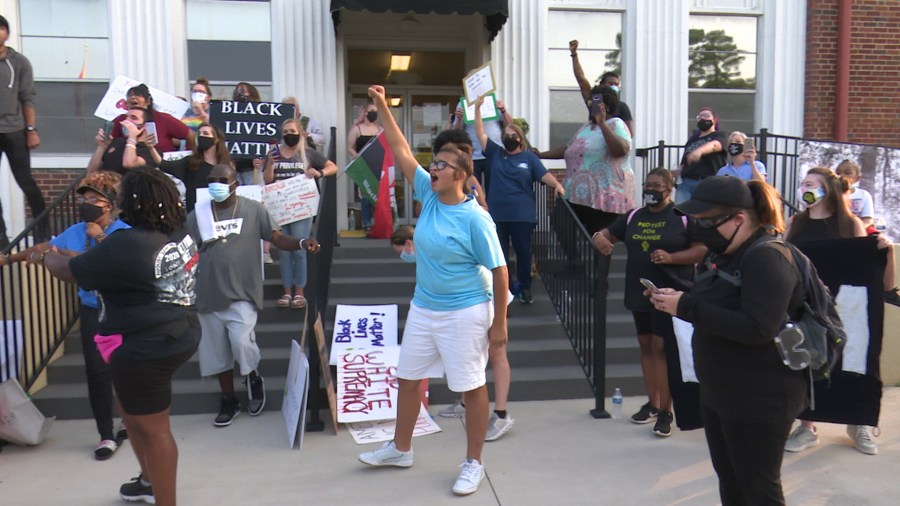