Tropical Storm Sally is now clear of the Florida Peninsula and is now in the Eastern Gulf of Mexico, an area favorable for development.

Sally is still a bit tilted (low and mid level centers are not aligned) thanks to some light wind shear created by an upper level low. I still expect those to become a bit more vertically stacked today as that upper level low exits and the little shear in place decreases.

We’re starting to see some convection bubble up around the low level center. If that convection can continue and become more intense, I’d expect a good bit more intensification through the day today. Regardless, additional intensification is expected, and Sally will likely be a hurricane at landfall. As of 4 a.m., a Hurricane Warning is in effect from Grand Isle, LA to Ocean Springs, MS, with a Tropical Storm Warning now in effect from east of Ocean Springs, MS to Indian Pass, FL.

My biggest concern regarding Sally remains the incredible rainfall totals. Sally will slow down significantly as it approaches the coastline due to an upper level jet countering the westward steering flow.

That will mean this storm will become incredibly slow, and impacts will last a very long time along the coast. Rainfall totals could exceed 20 inches in some spots along the Gulf Coast.

In addition to the flooding, hurricane force winds and storm surge are likely to cause life-threatening conditions along Louisiana, Mississippi, and Alabama’s coastline. Because the right side of the system will be the side impacting Mississippi, Alabama, and Florida’s coastline, tornadoes will also be possible. Rip currents and heavy surf will likely lead to double red flags on most beaches along the Alabama coast.

If you are on the coast, please heed all warnings and evacuation orders. After landfall, that upper level jet will turn Sally northeastward into Alabama. That will bring rain towards us later in the week, and might even bring some stronger storms depending on the exact track of the system. We’ll keep you up to date on our rain and storm chances over the next several days in the forecast discussion.

You can track Sally with our interactive map below, or using Live Alert 19: 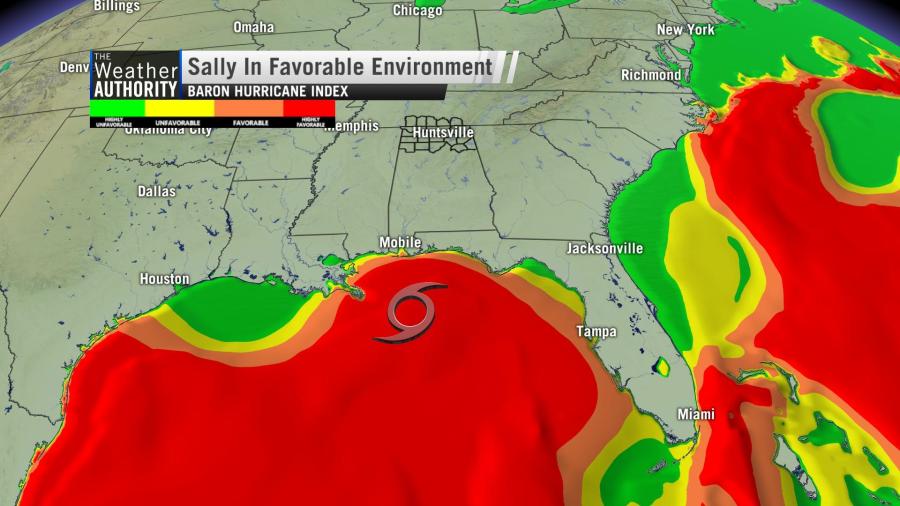