One on one with Secretary of State Brad Raffensperger

AUGUSTA, Ga. (WJBF) – The Secretary of State’s office is still investigating nearly a thousand cases of “Double voting” in Georgia — people who voted in person and absentee.

After the due diligence, they’ll turn their findings to the state board of elections — and violators could face felony charges including 10 years in jail, or up to 100-thousand dollar in fines.

With six weeks to go until election day, Georgia is gearing up for 6 million voters.

“We want to make sure people are voting appropriately and no one is voting twice”, said Raffensperger.

“To make sure that they verify in the poll book that the person has not voted already like in early voting, because theoretically someone could show up on November 3rd and already early voted.”

To avoid long lines like the primaries, the state will deploy field technicians to troubleshoot machines.

Raffensperger says, “With a pandemic, the poll workers we had have stepped down. The training was not face to face because of pandemic. In Fulton Co, the first time the equipment was that Tuesday morning and that cannot happen again.”

While face coverings can’t be mandated at precincts, the state has shipped gloves, sanitizer, masks and stylus pens to protect voters and minimize risk.

All eyes are now on the peach state with new voting machines and new poll workers to ensure a smooth election in the middle of a pandemic. 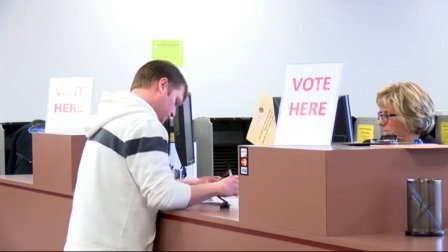