DEKALB COUNTY, Ala. – One Jackson County couple is fed up with a bumpy road near their home.

After getting no help from commissioners, they are taking matters into their own hands.

Joan Gibson have lived on Jackson Road 128 in Flat Rock for the last four decades.

“I love this little town and I love my community,” said Joan.

It links up with DeKalb County Road 733. And that is where the problem is.

“We’re tired of going across these holes knee-deep. My wife has called the commissioner twice and with no response,” said Joan’s husband Paul.

“I told him that if we were going through here and I was putting on my lipstick, it’d wind up in my nose. I mean, five miles an hour was the max that you could drive through here,” said Joan.

So, they are putting in the work themselves.

“I’m 76 and she is too, but here I am working for the road department. I’d rather fix it than have to go through them holes,” said Paul.

The Gibsons have already filled several of the potholes on this side of County Road 733, but there are still a lot more to be done. They told News 19 that some of the potholes are as deep as six inches.

The pair bought almost $100 worth of Quikrete and are filling the holes as best they can.

“There aint no telling how many people we’ve had to stop that said thank you,” said Paul.

They are hoping the county will put a layer of pavement or asphalt down to smooth things out, now that the holes are filled.

“Just a little help would help. I hate it had to go to the extent of calling you to get attention from someone, but I’m prepared to go further than you because we need the road fixed,” said Joan.

Commissioner Shane Whooten told News 19 there is a work order for the area, but that crews thought the potholes were on the connecting dirt road, which would need to be graded.

He added that trouble areas sometimes fall through the cracks when there is a misunderstanding like in this situation. 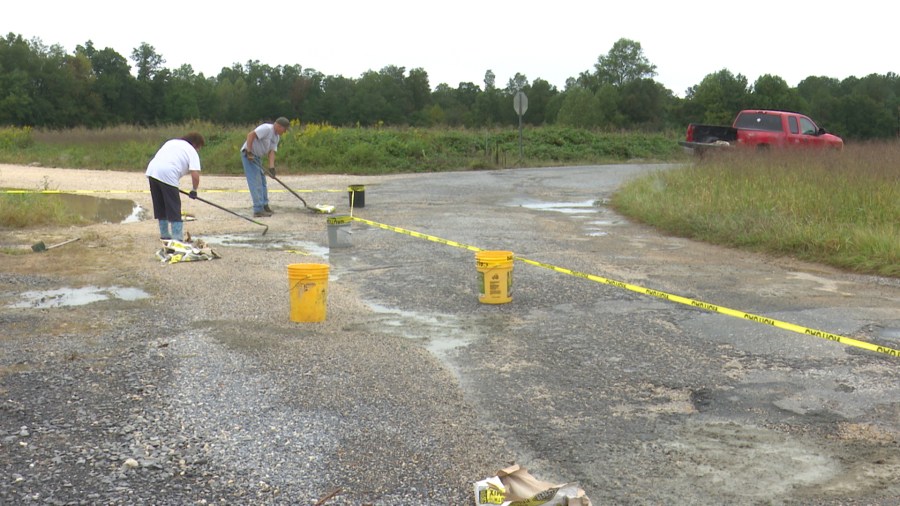