AURORA, Colo. (KDVR) — A woman who was left upside down in the backseat of a police car with her hands and feet restrained after her arrest said she cried when she saw the body camera footage of the incident more than a year later.

“I was just crying. I mean, bawling tears like if somebody had just died,” Shataeah Kelly said of the video, which was released Tuesday. “I am so numb inside. It feels like I’m actually dead, you know what I mean? Because (of) the pain that I felt watching the video.”

The video of the August 2019 incident shows Kelly continuously shouting and crying that she could not breathe when she slipped off the backseat, headfirst, onto the floorboard.

During the ride, Kelly, who is Black, called former Aurora police officer, Levi Huffine, who is white, “master” as she begged him to help her.

Police had arrived after Kelly, 28, called 911 to report that she needed help with an aggressive man who was bothering her, but she was taken into custody instead.

“I never knew how bad a heart could feel until I watched that video, and I was like, ‘How could you treat another person like that?'” said Kelly. “Animals don’t even deserve to be treated like that, and what you did was you treated me less than the dirt on the ground.”

The video release came during a City of Aurora Civil Service Commission hearing for Huffine, who is appealing his February 2020 termination.

She said she was not invited to speak during the four-day hearing, but she said she supports the Aurora Chief Vanessa Wilson’s decision to terminate Huffine.

“Chief, if you hear me, you’re doing the right thing,” said Kelly.  “I really appreciate you hearing my story.  You understand where my heart was. You understand that wrong is wrong and right is right.”

An investigation found Kelly was “initially verbally belligerent, but after several minutes, she slid onto the floorboard of the patrol vehicle with her head on the floor.”

She was in an “inverted position on the floorboard of the patrol vehicle for approximately 21 minutes until (Huffine) arrived at the jail. During that 21 minutes, she repeatedly asked for help, said that her neck was going to break, said that she could not breathe and that she did not want to die like that.” Huffine “did not look to see what had happened,” according to police disciplinary documents.

On Wednesday, Dr. Paul Taylor, a criminal justice expert for Huffine’s defense, testified, saying there was a “physical altercation” at the scene of the arrest and the use of a taser. He also cited “verbal threats” from Kelly.

“All of these things have to go into an officer’s calculus as to whether or not it’s worth me stopping and engaging in this situation or continuing on to the place where I have resource,” he said. 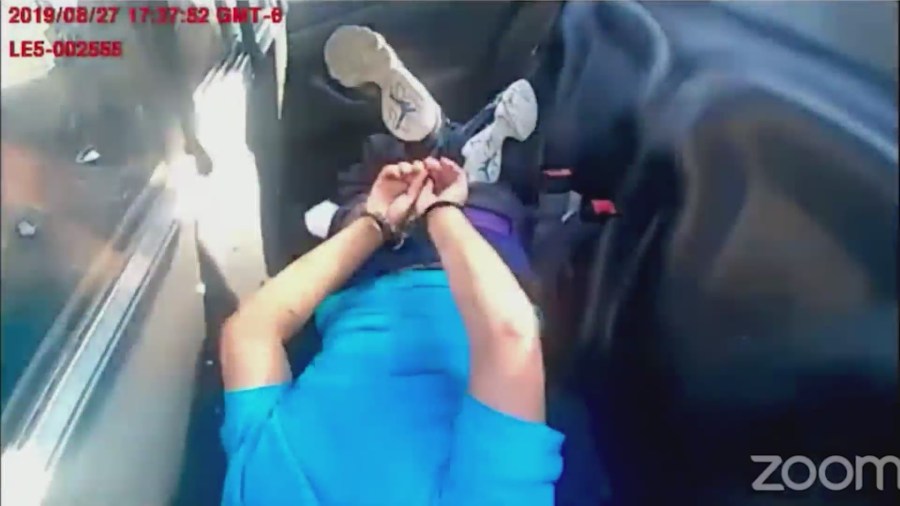