WASHINGTON (NEXSTAR) — A feverish and fatigued President Trump was flown to a military hospital Friday night to receive treatment while battling COVID-19.

We’ve learned he was given remdesivir therapy after being injected with an experimental drug combination during treatment at the White House.

While Trump’s medical status is being closely guarded, here’s what we know about the president’s condition:

The 74-year-old president had a fever and was experiencing shortness of breath, a source familiar with the matter told NewsNation.

Dr. Sean P. Conley, the physician to the president, said Saturday morning Trump has not had a fever and has not received supplemental oxygen today. Conley was vague about whether Trump has needed it since contracting COVID-19.

Infection causes mild or no symptoms in about 80% of cases. About 15% of people become seriously ill and 5% get critically ill.

Symptoms, when they do occur, usually appear two to 14 days after infection and can include loss of smell or taste, coughing, a sore throat, trouble breathing, fatigue, muscle or body aches, headache, nausea or vomiting, diarrhea and fever.

Up to half of patients who are hospitalized don’t have a fever when admitted but nearly all develop one. How people fare varies widely — some seem to be recovering and then suddenly worsen.

His symptoms appear to have quickly worsened Friday yet improved Saturday

Initial reports Friday morning were that the president was suffering very mild symptoms. As the day continued, there were multiple reports his condition was slowly worsening.

“This is serious,” an adviser to the president told CNN on Friday evening, noting Trump was very fatigued and having some trouble breathing.

“Our fear is that things can change quick,” the adviser said.

Even amid concern among some White House staffers, the president’s physician noted Friday evening there was no immediate cause for the public to be alarmed.

“This evening I am happy to report that the president is doing very well,” he said.

Older age, being male and having any other health problems increase the chance of severe illness.

At 74, “his age would be the primary risk factor,” said Dr. David Banach, an infectious diseases physician at the University of Connecticut’s health system.

People ages 65 to 74 are seven times more likely to be hospitalized for COVID-19 than those who are 18 to 29 years old, according to the U.S. Centers for Disease Control and Prevention. The risks rise exponentially at older ages.


Trump at higher risk of virus complications over age, weight

Trump also is considered obese, with a body mass index just past 30.

Trump takes a statin drug to lower his cholesterol, and that condition also raises his risk for COVID-19 complications, doctors said.

While seeing the president go to the hospital might feel like an aggressive move, one medical expert believes it was the right call if Trump was experiencing worsening symptoms.

“I wouldn’t struggle to care for the President in the White House when you can take him to really a very, very secure facility with world-class staff,” Dr. Jonathan Reiner told CNN about Walter Reed. “But you would only do that if you felt that his respiratory status was deteriorating.”

It’s unclear how long his hospital stay could last.

Trump was given remdesivir Friday night at Walter Reed. Remdesivir is the only treatment that’s been shown in a rigorous experiment to help fight the coronavirus.

Earlier on Friday, Trump’s physician said the president received a dose of an experimental antibody combination by Regeneron that is in clinical trials.

He also was taking zinc, vitamin D, an antacid called famotidine, melatonin and aspirin. None of those have been proven to be effective against COVID-19.

Trump apparently is not receiving hydroxychloroquine, a drug he widely promoted that has been shown in many studies to be ineffective for preventing or treating COVID-19. 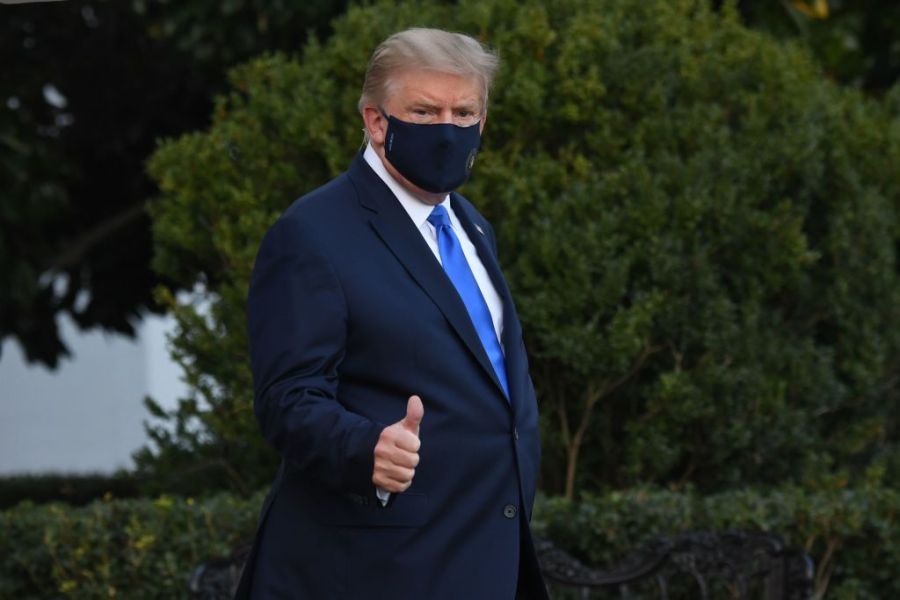