WASHINGTON (NEXSTAR) — President Donald Trump “has continued to improve” but faced serious symptoms on Friday, the White House physician said Sunday, seeking to clarify contradictory statements and confusion that previously raised questions about the seriousness of the president’s condition.

Navy Cmdr. Dr. Sean Conley acknowledged the confusion and offered new details as he addressed the media from on the steps of Walter Reed National Military Medical Center, where Trump was being treated for COVID-19.

Conley said the president had a “high fever” and a blood oxygen level below 94% on Friday before he was hospitalized.

While Trump’s medical status is being closely guarded, here’s what we know about the president’s condition:

Trump could be discharged as early as Monday

“Our hope is we can plan for a discharge for as early as tomorrow,” one of the doctors treating the president said to reporters on Sunday.

Of course, this is dependent on whether Trump’s condition continues to improve. If discharge occurs, doctors said the president would continue his treatment from the White House.

On Friday night, he began a five-day course of remdesivir, a Gilead Sciences drug currently used for moderately and severely ill patients. It was largely believed Trump would remain in the hospital through that treatment window — although it now sounds like he could be discharged earlier.

Trump’s expected stay of “a few days” at Walter Reed was described as precautionary, according to White House officials.

Conley again denied reports the president has experienced shortness of breath — even as multiple news outlets, including NewsNation, reported Trump suffered that symptom on Friday.

There’s no indication that Trump has had a fever in the last 48 hours. It’s worth noting Trump is taking aspirin, which lowers body temperature and could mask or mitigate that symptom.

Up to half of patients who are hospitalized don’t have a fever when admitted but nearly all develop one. How people fare varies widely — some seem to be recovering and then suddenly worsen.

Symptoms, when they do occur, usually appear two to 14 days after infection and can include loss of smell or taste, coughing, a sore throat, trouble breathing, fatigue, muscle or body aches, headache, nausea or vomiting, diarrhea and fever.

His symptoms continue to improve, according to doctors

Trump’s chief doctor continued to express cautious optimism after noting Saturday the president was “not yet out of the woods.”

On Saturday, Conley said that Trump’s symptoms, including a mild cough, nasal congestion and fatigue, “are now resolving and improving.”


Trump at higher risk of virus complications over age, weight

Initial reports Friday morning were that the president was suffering very mild symptoms. As the day continued, there were multiple reports his condition was slowly worsening.

“This is serious,” an adviser to the president told CNN on Friday evening, noting Trump was very fatigued and having some trouble breathing.

“Our fear is that things can change quick,” the adviser said.

The president has taken dexamethasone, according to Conley. It is a potent steroid that prevents the release of substances in the body that cause inflammation.

Trump also continues to receive remdesivir. The drug is the only treatment that’s been shown in a rigorous experiment to help fight the coronavirus.

Earlier on Friday, Trump’s physician said the president received a dose of an experimental antibody combination by Regeneron that is in clinical trials.


What is remdesivir? What we know about Trump’s latest treatment

The drugs work in different ways — the antibodies help the immune system rid the body of virus and remdesivir curbs the virus’s ability to multiply.

He also was taking zinc, vitamin D, an antacid called famotidine, melatonin and aspirin. None of those have been proven to be effective against COVID-19.

Trump apparently is not receiving hydroxychloroquine, a drug he widely promoted that has been shown in many studies to be ineffective for preventing or treating COVID-19. 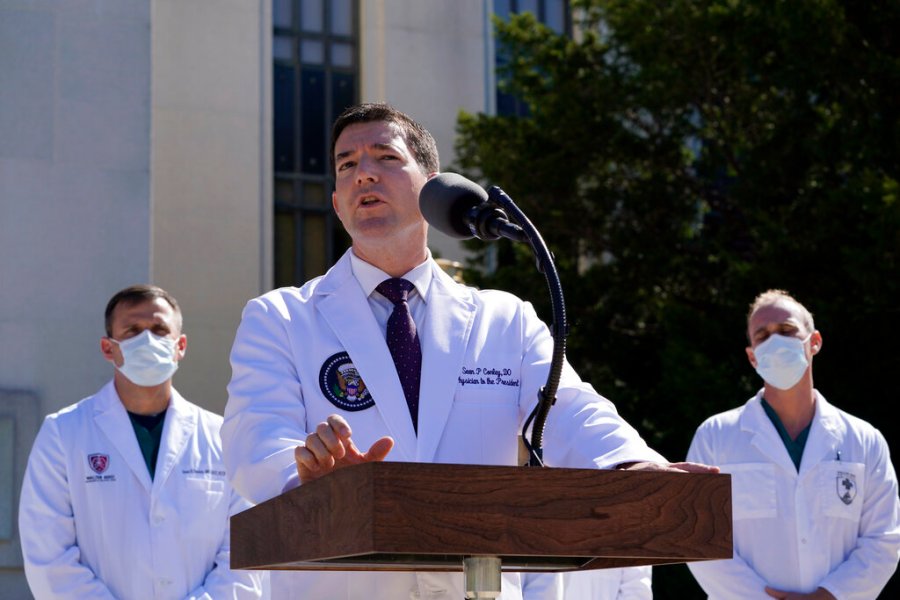