When Tasha Reese moved into the neighborhood six years ago, Marne Litton welcomed her family over for dinner.

“We were laughing, had a great time and then we met their daughters and she met our kids,” Litton said.

Over time they became friends. Through that bond, they’ve learned a lot about the other, including politics. Each supports a different candidate. Litton, a Republican, supports President Donald Trump, and Reese, a Democrat, supports former Vice President Joe Biden in the upcoming Nov. 3 presidential election.

For the two Cedar Park, Texas, neighbors, it’s no debate.

“I know that she’s a Trump supporter, and you know, I try to keep an open mind, and that’s the way I live my life. I know that we’re going through challenging times right now,” Reese said.


VIDEO: Good Samaritans try to save 2 trapped in burning car

Litton has felt some differences this year in the way some have viewed her.

“I think people are really quick to judge. I know, I’ve seen some looks. I’ve been out here pushing my daughter on the swing and had the sign and I’ve seen specific people walk by and look at my sign and just like this,” she said, shaking her head. “Right off the bat, judge me. I’m like, see, just because you don’t like a party, either a political party or a person so much their name is on a sign, they’ve just defined who you are. That’s just not right.”

Litton decided to put a Trump sign in her yard because she noticed no one else had one.

“Not that I was frustrated that a lot of people had Biden signs, but I knew several people in our neighborhood who are Trump supporters and I actually talked to people and they were afraid to put a sign in their yard. They’re afraid their car or house would get vandalized, their signs would get taken,” she said. “I was like, ‘That’s ridiculous!'”

Litton said that’s when she and Reese decided to be proactive and “start a positive movement,” beginning with a post on their neighborhood page.

“[Reese was] taking pictures and then we posted,” Litton said.

Lately I’ve been really saddened by how neighbors are treating neighbors on this page. Differences in opinion regarding a lot of matters….school, election, covid, etc. I do not understand how one person cannot respect another person and their point of view even if we don’t agree. So in light of that my neighbor, and FRIEND, and I got together in hopes that maybe this will spark some kindness and acceptance! We love each other! She’s had my kids over for movie night, we’ve had them over for dinner, we are always borrowing things from one another and bringing each other goodies. Guess what….different skin color, different political beliefs but mutual love and respect. So can everyone take a damn breath and calm down! Cheers to loving my neighbor even though we don’t see eye to eye on everything. #trump2020 #Biden2020 #neighbors #friends #respect #america #kindnessrocks

“We had a lot of thank-yous for doing it, so it just made us happy,” Litton said. “Between our page, it was hundreds of shares, thousands of likes. Everybody was like, ‘Why can’t everybody be like this. This is what it needs to be like.'”

And Reese said positive response has been spreading.

“I have a brother and sister-in-law that’s in Washington State and they shared it there as well. California too. It’s been spreading. It’s crazy,” she said.

The pair hope their post encourages others to reach out to their neighbors and start a dialogue.

“The best ideas in America have come from two different parties and political views coming together and finding compromises. That’s where great ideas come from,” Litton said. “When you talk like adults and have open dialogue, you’re like, ‘Oh, I hadn’t thought about that’ or ‘Oh, I can see your point of view on that,’ instead of just my way or the highway.”

They believe that kind of communication is being lost.

“Our nation, our country is losing communication as a whole, and I think just by us all coming together and talking about this issue, like we’re doing right now, talking about listening to everybody’s points of views and opinions, I think we can be a better nation,” Reese said.

Litton believes social media is part of the problem, saying it causes “a gap and communication is lost.”

To regain it, Reese says people need to take a step back.

“Reflect on how you’re gonna approach it… I think I even commented on Marne’s [post] and I said, ‘Yes, if everyone could just breathe.’ Just take a step back and look at the whole picture. Whether if it’s political, race, sex — we all need to come together and respect one another.” 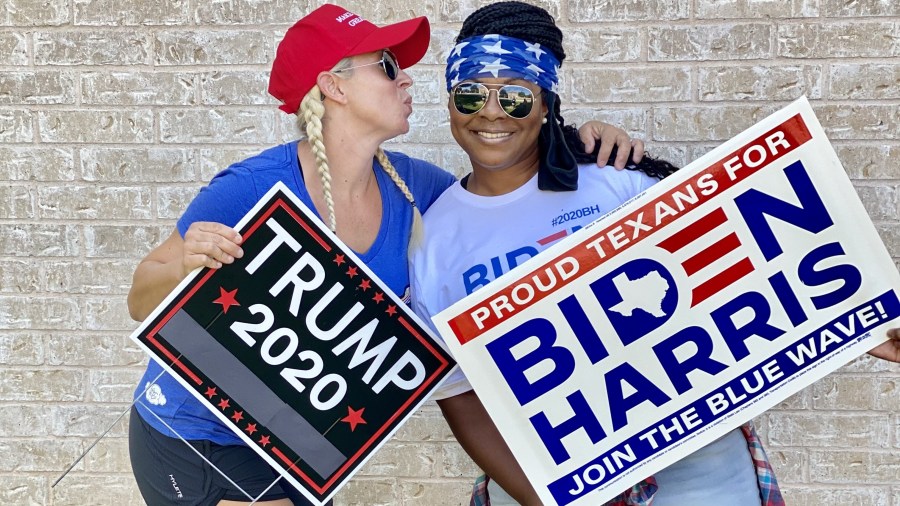