WASHINGTON (NewsNation Now) — After four days of being treated for COVID-19 at Walter Reed Medical Center President Donald Trump took to Twitter Monday to announce his departure. The announcement comes as his doctors are getting ready to provide an update on his status.

“I will be leaving the great Walter Reed Medical Center today at 6:30 P.M. Feeling really good! Don’t be afraid of Covid. Don’t let it dominate your life,” Trumped tweeted. “We have developed, under the Trump Administration, some really great drugs & knowledge. I feel better than I did 20 years ago.”

The president’s medical team told reporters on Sunday that Trump could return to the White House as early as Monday. Even if he does, he will need to continue treatment as the president is still undergoing a five-day course of an intravenous antiviral drug, Remdesivir. He is also being treated with a steroid, dexmethasone. The normal quarantine period for anyone testing positive for the coronavirus is 14 days.


Trump coronavirus: What COVID-19 treatment is the president receiving?

White House Chief of Staff Mark Meadows on Monday reiterated the hope that Trump would be released shortly from the hospital.

“He will meet with his doctors and nurses this morning to make further assessments of his progress,” Meadows told Fox News. “We are still optimistic that he will be able to return to the White House later today.”.

Sequestered at Walter Reed National Military Medical Center outside Washington since Friday, Trump has released a series of videos about his recovery.

“It’s a very interesting journey. I learned a lot about COVID,” he said in a video posted to Twitter on Sunday.

Trump briefly ventured out in a motorcade on Sunday to wave to supporters who had gathered outside the hospital. Secret Service agents could be seen inside the black SUV with the president, wearing masks and other protective gear.

Some medical professionals have questioned the decision.

“Every single person in the vehicle during that completely unnecessary presidential ‘drive-by’ just now has to be quarantined for 14 days. They might get sick. They may die,” said Dr. James P. Phillips, an attending physician at Walter Reed who is a critic of Trump and his handling of the pandemic.

White House spokesman Judd Deere said Trump’s trip outside the hospital “was cleared by the medical team as safe to do.” He said precautions were taken, including using personal protective equipment, to protect the president as well as White House officials and Secret Service agents.

On Friday, Trump was given a single dose of a drug that Regeneron Pharmaceuticals Inc. is testing to supply antibodies to help his immune system fight the virus. Trump also has taken two doses of a five-day course of remdesivir, a Gilead Sciences drug currently used for moderately and severely ill patients.

Dr. Sean Conley, the president’s physician, said Trump was given the steroid after his blood oxygen level had dropped suddenly twice in recent days.

Conley said Trump had a “high fever” and a blood oxygen level below 94% on Friday and during “another episode” on Saturday.

Trump’s team said Sunday that the president received oxygen at the White House on Friday. They were not clear on whether he received any Saturday.

Pressed about conflicting information he and the White House released on Saturday, Conley acknowledged that he had tried to present a sunnier description of the president’s condition.

“I was trying to reflect the upbeat attitude that the team, the president, that his course of illness has had. Didn’t want to give any information that might steer the course of illness in another direction,” Conley said. “And in doing so, you know, it came off that we were trying to hide something, which wasn’t necessarily true. The fact of the matter is that he’s doing really well.”

Democratic presidential nominee Joe Biden, 77, has tested negative for the disease several times since sharing a debate stage with Trump last week. He’s scheduled to participate in a town hall with Florida voters in Miami Monday. 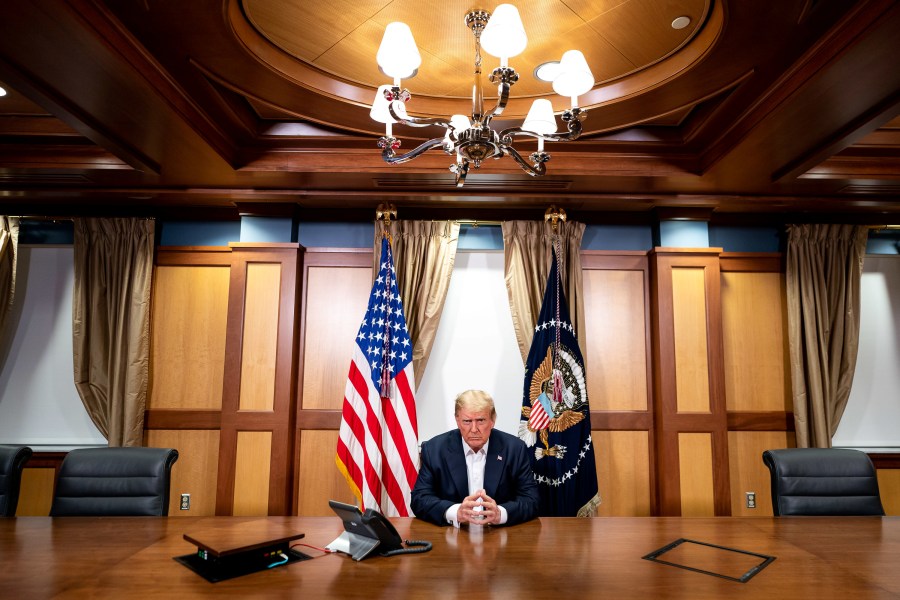