The rain has come to an end for north Alabama and south Tennessee, but it will take another 24 hours to shake the cloud cover!

This means that overnight temperatures will be slow to cool into the mid 60s through sunrise Monday. A few extra hours of sunshine are expected mid-day Monday, so afternoon highs will rise to the low 80s.

Monday night’s cold front won’t have very much “bite” in terms of cooler weather, though it will scrub much of the humidity out of the region and bring dry, crisp air back to the Tennessee Valley. Afternoon highs will be warm yet seasonable — in the upper 70s to low 80s, which is not much warmer than the average high this time of year (76 degrees).

If you are searching for a BIGGER cool down, you are in luck! A late-week cold front will bring chilly air to north Alabama and south Tennessee in time for the weekend.

Delta’s rainfall has cleared the Tennessee Valley, but the cloud cover (and tropical air mass) will stubbornly stay in place over the region through Monday morning.

A few breaks in the clouds are possible Monday afternoon, but that break will be short lived as a cold front ushers in rain clouds to north Alabama and south Tennessee through Monday evening.

The rain will be rather limited, as the cold front will be rather weak and not have the “punch” necessary to produce a large amount of rainfall. Only about a tenth of an inch of rain is expected, and even then, it will be more of the “hit or miss” variety rather than widespread.

Dry air will settle into the region on Tuesday and Wednesday, but a second cold front will sweep through on Thursday. This cold front will also produce isolated rain showers, but it will bring a colder punch of air as well!

Another blast of chilly air next weekend

Remember the first weekend of October? Morning lows dipped into the upper 30s and low 40s, and afternoon highs were limited to the upper 60s!

A repeat of that perfect Fall weather returns this coming weekend, as cold and very dry air rushes in behind Thursday’s cold front. Get ready to break out the jackets and scarves, sweater weather will be back in time for apple picking and pumpkin carving! 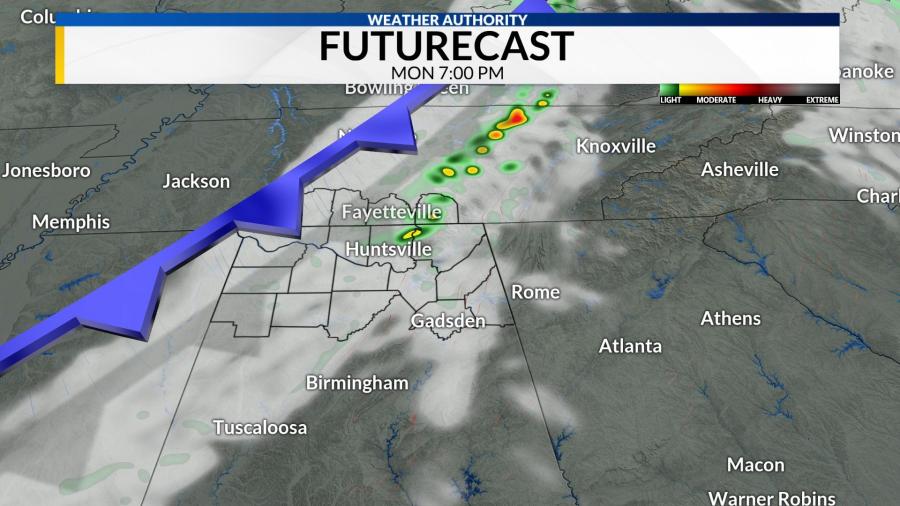