A federal appeals court has denied a request by Alabama officials to block a judge’s ruling that says Alabama cannot prohibit counties from offering curbside voting on Nov. 3 because of the coronavirus pandemic.

Attorney General Steve Marshall and Secretary of State John Merrill said the decision would be appealed to the Supreme Court.

Merrill said he was not aware of any counties that intend to offer curbside voting. madison county and jefferson county will not.

A three-judge panel of the U.S. 11th Circuit Court of Appeals issued a split decision, granting the request of Merrill and Marshall to block another portion of the judge’s ruling, which was to prohibit the state from enforcing witness and photo ID requirements for certain absentee voters at increased risk of serious illness from COVID-19.

Tuesday’s decision comes in a lawsuit filed by individuals and organizations who claimed that certain state voting laws and restrictions violated the voting rights for some people at high risk from the virus.

U.S. District Judge Abdul K. Kallon had ruled in the plaintiffs’ favor two weeks ago. Merrill and Marshall asked the appeals court for a stay. Lawyers representing Merrill and Alabama officials argued that the challenged requirements did not place an undue burden on the plaintiffs’ ability to exercise their voting rights and are important safeguards to prevent voter fraud. Merrill said curbside voting was illegal.

The lawsuit was filed before the July 14 runoff. Kallon issued a similar ruling in favor of the plaintiffs then, but it was blocked by the U.S. Supreme Court. But the case continued for the issues to be considered for the general election.

It’s unclear if any counties will offer curbside voting. Madison County Probate Judge Frank Barger said curbside voting would not be offered in the county on Nov. 3.

“Madison County will not be offering curbside voting on the 3rd of November,” said Probate Judge Frank Barger. “The logistical dynamics and the development and implementation of proper training that would be necessary to put curbside voting in place at 72 physical voting locations could take several years of planning.”

The NAACP Legal Defense and Educational Fund, the Southern Poverty Law Center, the American Civil Liberties Union, the ACLU of Alabama, and the Alabama Disabilities Advocacy Program represent the plaintiffs in the case. The plaintiffs include four organizations — People First of Alabama, Greater Birmingham Ministries, the Alabama State Conference of the NAACP, and Black Voters Matter Capacity Building Institute – as well as some individual voters.

They challenged three provisions as applied to voters at high risk from COVID-19 — state law requiring an absentee ballot to be witnessed by two people or a notary, the requirement for a photo ID with an absentee ballot application, and the state’s de facto ban on curbside voting. Merrill opposes curbside voting and has said he would move to block counties from providing it.

“While we are disappointed in the ruling of the 11th Circuit Court of Appeals re-instating the need for onerous requirements to vote absentee in a pandemic, we fully agree with the Court in it’s finding that Secretary Merrill is prohibited from meddling in allowing voters, including voters at high risk, from voting in a manner encouraged by the Centers for Disease Control and not explicitly prohibited by Alabama Law, namely curbside voting, in which voters may exercise their right to vote in a safe manner,” Van Der Pol said. “We look forward to local election officials protecting the right of vulnerable individuals to be a part of the electoral system by instituting curbside voting, and encourage voters to reach out to those responsible individuals to make their needs known.”

“The 11th Circuit’s ruling to block a district court order lifting Alabama’s photo ID and witness requirements for absentee voters is a win for the people of Alabama! The stay that has been granted maintains the integrity and security of elections in our state – thus proving that our current election laws are not an obstacle to voters in Alabama.

“The photo ID and witness requirements are necessary deterrents for those looking to commit voter fraud, and I am glad the 11th Circuit has recognized their importance in safeguarding the elections process.”

“While our office is currently unaware of any county planning to provide curbside voting for the November 3, 2020 General Election, we intend to appeal to the Supreme Court to see that this fraudulent practice is banned in Alabama, as it is not currently allowed by state law.

“The confusion that has been caused from this lawsuit is a reminder that judges should refrain from attempting to alter election procedures after ballots have been distributed. I look forward to continuing with the successful and secure administration of the November 3 election.”

Merrill issued an emergency rule allowing anyone who is concerned about going to the polls because of the pandemic to vote absentee. Information on absentee voting.

“While we welcome the 11th Circuit Court of Appeals decision to grant the State’s emergency stay request so that Alabama’s absentee voting law requirements of a valid photo ID and witnesses remain in effect for the November 3 general election,” said Attorney General Marshall, “the appeals court’s decision to allow curbside voting conflicts with State efforts to ensure election security. We will therefore seek a stay from the U.S. Supreme Court as soon as possible.

Marshall said in a statement: “While we welcome the 11th Circuit Court of Appeals decision to grant the State’s emergency stay request so that Alabama’s absentee voting law requirements of a valid photo ID and witnesses remain in effect for the November 3 general election, the appeals court’s decision to allow curbside voting conflicts with State efforts to ensure election security. We will therefore seek a stay from the U.S. Supreme Court as soon as possible.”

Caren Short, senior staff attorney for the Southern Poverty Law Center said it was regrettable that the stay means that medically vulnerable voters still have to meet the witness and photo ID requirements for absentee voting. The lawsuit maintains that those requirements force those voters to risk exposure to the virus.

“While today’s appeals court decision still gives Alabama counties the ability to institute curbside voting processes in the 3 weeks until Election Day, it’s unfortunate the decision also put back into place the unnecessary absentee ballot requirements that burden high-risk voters and add no additional protection to the integrity of Alabama’s elections. Expert testimony and a voluminous record entered into evidence during a 10-day trial last month made clear why the state’s ban on curbside voting and onerous absentee ballot requirements represent unconstitutional barriers to voting for medically vulnerable Alabamians during an ongoing pandemic.

“We know that Alabama voters — particularly Black voters — have and will overcome countless barriers to cast their ballot, and we encourage them to do so as safely as possible.”

“While we welcome the 11th Circuit Court of Appeals decision to grant the State’s emergency stay request so that Alabama’s absentee voting law requirements of a valid photo ID and witnesses remain in effect for the November 3 general election,” said Attorney General Marshall, “the appeals court’s decision to allow curbside voting conflicts with State efforts to ensure election security. We will therefore seek a stay from the U.S. Supreme Court as soon as possible.

“Alabama has a history of voter fraud that the photo ID and witness requirements help address,” Attorney General Marshall added. “Those safeguards are both important and easily complied with, even during the pandemic. Alabama has the right and the duty to ensure that our elections are conducted with integrity, and Alabama voters deserve to know they can cast their ballots with confidence that election security safeguards will remain in place.”

Alabama law requires most categories of voters who apply for an absentee ballot to submit a copy of their photo ID and have two witnesses or a notary sign the envelope in which a voter submits the absentee ballot. The federal district court’s September 30 ruling prohibited local election officials from enforcing these anti-fraud provisions, including prohibiting curbside voting despite the Secretary of State’s judgment that curbside voting violates Alabama law and cannot be practically implemented for the first time ever in a matter of weeks.

In June, the federal district court similarly enjoined the State’s absentee voting law during the July 14 runoff elections. However, the U.S. Supreme Court disagreed, staying that injunction and allowing the State to enforce its election laws. 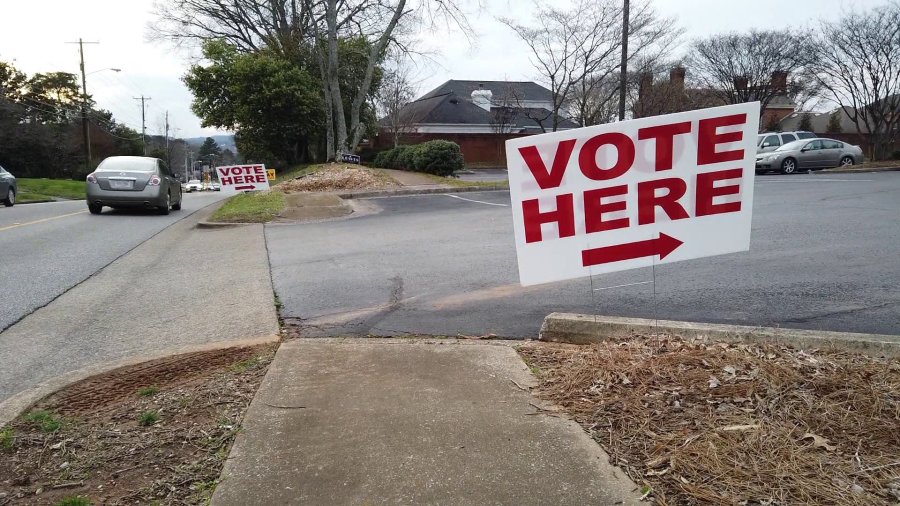