The group Say Their Names Alabama has been leading the charge to get the Confederate flag removed from the Marshall County courthouse in Albertville since August.

That group, along with members of several other organizations across North Alabama, held a sit-in at Neena’s Courthouse Grill inside the courthouse in Guntersville.

Although group members have spoken at several commission meetings in the past, the sit-in was the first protest the group has held inside the courthouse.

Between chants like “Black Lives Matters” and “End the Confederacy,” activists sat at the restaurant, chatted, and ate together.

Marshall County commissioners have yet to address the issue.

“We have a petition that has over 3,200 signatures. That’s been ignored. Our emails, our calls, our texts, our letters that we sent through the mail. They think this is a joke, so we are here on their own turf,” said Say Their Names Alabama lead Unique Dunston.

Commission Chairman James Hutcheson watched the sit-in Wednesday, but told News 19 he would not do an interview about it.

Protestors were initially wearing signs but were denied entry.

“Banners, flags, anything of political activity or anything like that, we don’t allow coming into the courthouse for anyone for that reason and we’re not going to start today,” explained Sheriff Phil Sims.

Sims said his department is treating the protestors as it would anyone else on any other day.

“Anybody that comes in, they cannot be disruptive to county business, disruptive to other people or disrupt people from coming into the county courthouse itself,” said Sims.

For the most part, the sit-in was peaceful.

The only exception was when protestors sitting on the floor refused when told to sit in their chairs by the Sheriff.

After around a minute of discussion, they got up and sat in chairs.

While there are some rules to getting confederate statues removed, there are not any for the Confederate flag.

“They have complete control of when the flag comes down if it comes down. Number two is fill out the waiver application to start the process to get the monument in Albertville removed,” explained Dunston.

The majority of the tables at Neena’s Courthouse Grill were taken up by the activists.

One sit-in participant gave the restaurant’s owner $50 in hopes of replacing any business she may have lost due to the sit-in.

After the sit-in, the protestors stood outside the courthouse in Guntersville with their signs and chanted.

Wednesday evening, the groups moved to the courthouse in Albertville for the bi-monthly march, where they were met once again by counter protesters from the local branch of the Sons of Confederate Veterans. 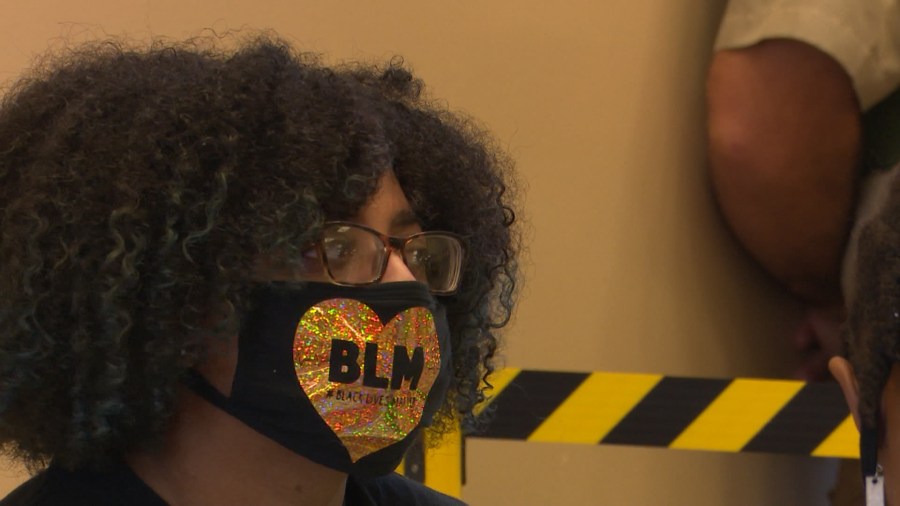