JACKSON COUNTY, Ala – For over a month, News 19 has been tracking issues with the town of Pisgah’s water system. Now, at the advice of ADEM, the town will introduce Aqua Gold into the system.

According to ADEM, the chemical is widely used in water systems across Alabama and the United States. Aqua Gold aids in corrosion control by coating plumbing lines to prevent the release of metals. The National Science Foundation approves this water treatment. Essentially, it can help clear up brown water.

News 19 has detailed the problems within the water system which includes sediment build-up inside a water storage tank that needs to be refurbished. ADEM is providing nearly $500,000 to help with that project along with getting new water meters.

Recently, Pisgah was advised by ADEM to replace filters that sifted out iron and manganese. According to Pisgah Town Councilman Andrew Meeks, the new filters recently needed correction.

“They were brand new and they messed up. They were causing what was being filtered to backflush into the system. That’s why certain people would get a slug of brown water,” Meeks said.

The issue has since been corrected. Meeks also says the water tank repair is being delayed until Spring because the weather currently will not make repairs feasible. Meeks says the current weather makes the tank “sweat” and the upgrades cannot be made while that is happening.

ADEM says Pisgah will be required to form an action plan and report back to the state frequently as a result of the continued problems with brown water.

Despite the potential fixes on the table, water issues in Pisgah have been around for decades. Some people have only recently started having issues with brown water. However, families are not wanting to leave the Pisgah water system out of frustration.

Jesse Daniel has talked with News 19 several times. He is looking to join the Section-Dutton water system.

“I’ve got a 2-year-old daughter and when my wife fills that bathtub up and it’s brown, it’s not a good night,” said Daniel’s.

Previously, News 19 reported the family’s request to leave the Pisgah water system was denied. While the family was under the impression that was the case, that is not true. Following a council meeting in early October, a work session followed. A work session is not a formal meeting where agenda items are voted on. News 19 obtained a recording of that meeting and it was not clear at the time if the conversations were in a formal council meeting. Prior to airing some of the recording, News 19 reached out to Councilman Meeks without success when trying to get specific answers from the recording. Due to COVID-19, access to the town chambers is limited, therefore phone calls went unanswered from News 19. Email attempts did not end up going to the right inbox.

News 19 aired a recording in which Councilman Meeks said, “I would make the recommendation to the mayor that he send the water department over there in the morning to turn it off at 8 o’clock.”

That suggestion was never acted upon. Meeks says in the small town of Pisgah, everyone knows everyone. Things were getting tense and he tried to lighten the mood.

“It is what it is. That was said in a work session after a council meeting. When other people were spouting things off. I was doing it jokingly. Just to make light of the situation. It was a very tense time,” said Meeks.

The family did not think the joke was funny. It remains to be seen if the Daniels will be able to join a different water system. The family and the towns are stuck in red tape trying to get waivers from each other. One town won’t grant a waiver without documents from the other. Yet the other won’t give documents without a waiver. It gets a little confusing.

Despite the drama and consistent issues with brown water, believe it or not, the water is not unsafe to use. ADEM testing confirms that. However, most families do not drink or cook with the water when it is brown.

“It’s not unsafe. Because I would be the first to say, hey, it’s unsafe. You don’t need to drink it though. Because I have a 2-year-old and a 5-year-old at home with a wife. I don’t want to see anybody hurt,” Meeks said. 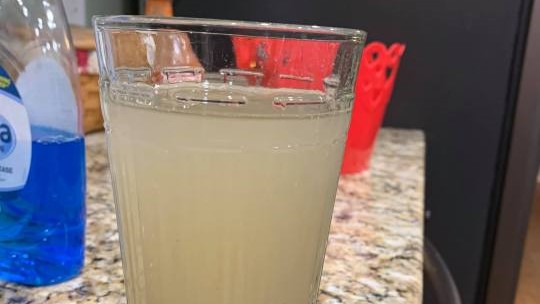