Flashback to the 80s this week, rain chances slim for the next few days

This time of year, when we get a shot of chilly air, it’s important to savor the moments because that cool air quickly warms up in a short amount of time!

That will be the case this week: High pressure off the coast of the Carolinas will produce a southeasterly breeze across the region, tapping into slightly warmer and more humid air from the Atlantic Ocean.

In addition, partly cloudy skies means plenty of sunshine will be available to warm the air quickly through the afternoons.

As a result, morning lows will settle into the upper 50s/low 60s, and afternoon highs will feel quite warm — low to mid 80s, which would run about 10 degrees warmer than average.

Need rain? Don’t count on it until next weekend

Precipitation-wise, north Alabama is doing “okay” for the month of October, and year-to-date rainfall totals are still running well above average.

However, if you are tending to crops or plants that need additional hydration, it would be wise to run the sprinklers and garden hoses through the first half of this week.

A cold front will inch closer to the Tennessee Valley Monday, but it will stall out over middle Tennessee and become stationary before it is able to arrive in north Alabama.

As a result, rain won’t be in the picture for the Tennessee Valley for the next few days, though cloud cover may thicken some on Monday and Tuesday afternoon.

A stronger cold front moves in on Friday of next week with a chance of some scattered showers and storms, but even then, we are far from a guaranteed soaker anytime soon! 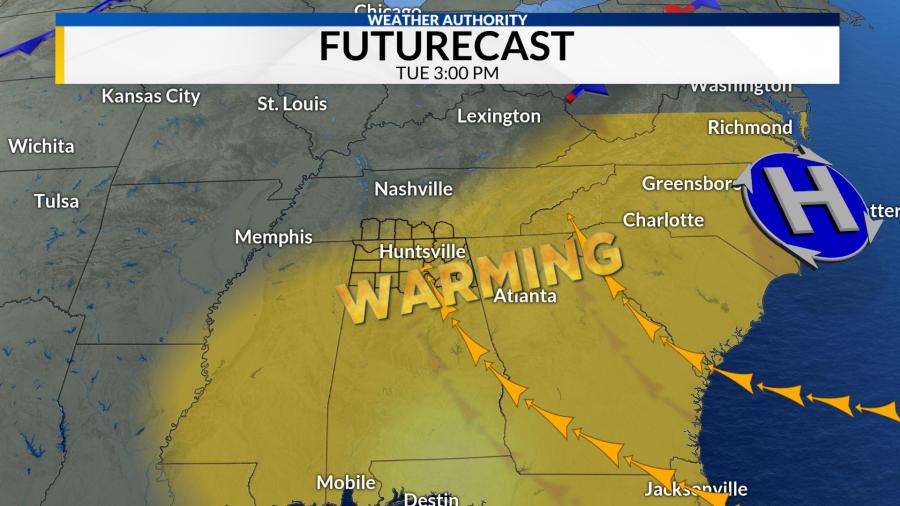