ALBERTVILLE, Ala. – Say Their Names Alabama members were hoping to get the City of Albertville council members to back up their demands for the removal of the Confederate flag outside the Marshall County courthouse in Albertville.

The courthouse is next door to Albertville city hall.

On Oct. 12, 2020, Pastor Ben Alford was approved to speak to council members at the Monday, Oct. 19, 2020 meeting and propose they help urge the county commissioners to bring the flag down.

However, the meeting was postponed to Monday, Oct. 26, 2020 with little notice to those planning to speak to council members.

The Albertville city clerk told News 19 she posted about the postponement on Oct. 16, 2020.

Say Their Names Alabama leader Unique Dunston told News 19 that the “rebel” flag has been in place here since 2016.

“I honestly thought that my city was better than this, but it’s showing me otherwise,” said Dunston. “The complacency around here is astronomical.”

It, along with a Confederate monument, was put in place by the Capt. John Rayburn Camp 452 Sons of Confederate Veterans group.

Members of the local Sons of Confederate Veterans chapter counter-protest against Say Their Names Alabama twice a month on the night of regularly scheduled county commission meetings.

The protests have been happening since August 2020.

Despite national attention on them, the commission has yet to discuss the removal of the Confederate flag at the meetings.

“Our calls, our texts, our emails. It’s been falling on deaf ears at the county,” said Dunston.

Because the flag is not a monument, it can be brought down by the county commission at any time.

News 19 called and emailed Albertville mayor Tracy Honea to see if he would be willing to speak with us about the meeting postponement but he has not responded.

City employees said he was not in the office.

The city clerk said, though, that the postponement was because they were unable to give a proper seven-day notice of a bond refund issue in the local newspaper as the newspaper cut back its distribution from three times a week to two amidst COVID-19.

“My message to the council and the City of Albertville is to be the city that I grew up in which is supposedly a place of inclusion and very welcoming and warming. They have a lot of power and if the city gets behind this, the county will realize, ‘OK this isn’t just a couple people off the street that want this gone and that are making noise. No this is a lot of people.’ This is more than 3,300 people, according to our petition,” explained Dunston.

Dunston said she was disappointed by the council meeting postponement, but added she and Alford will be at the City of Albertville council meeting Monday, Oct. 26, 2020 to urge the city council to help get the flag removed. 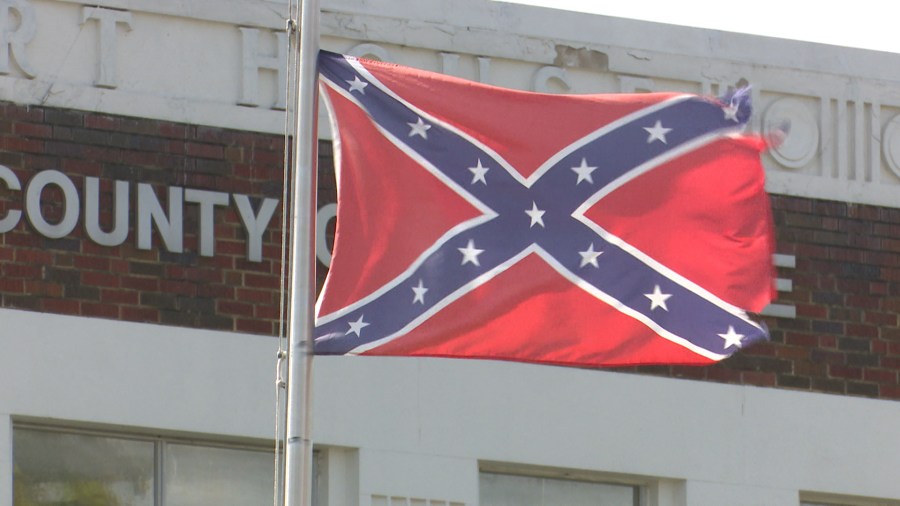