The deal comes two days before the deadline for Mexico to make good on its obligations under a 1944 binational water treaty for the management of Rio Grande water essential to farmers and water districts on both sides of the border.

Worries that Mexico would be unable to pay its debt prompted officials like Texas Gov. Greg Abbott to urge the State Department to ensure compliance. The Texas Commission on Environmental Quality Texas pointed out that farmers and municipalities rely on that water and that Mexico should make timely payment.

An agreement called Minute No. 325 of the treaty calls for the transfer of approximately 105,000 acre-feet (130 million cubic meters) of water at Amistad and Falcon International Reservoirs from Mexican ownership to U.S. ownership.

The deal apparently diffuses a tense diplomatic situation between the two countries and a potentially explosive situation in the state of Chihuahua, where Mexican farmers last month routed a National Guard detachment and took over La Boquilla Dam, thrashing President Andres Manuel Lopez Obrador’s plans to use that water to settle the debt with the U.S.

The agreement establishes work groups to develop water management alternatives to increase reliability of Rio Grande water deliveries to users in the United States and Mexico, the IBWC said.

Moreover, it includes a provision for U.S. humanitarian support to Mexico, if needed, to guarantee municipal water supplies for Mexican communities along the Rio Grande downstream from Amistad Dam.

“We appreciate the efforts by Mexican government officials to fulfill their treaty obligations on time. This agreement sets us on a path to improve Rio Grande management in the future to the benefit of both countries,” said U.S. Commissioner Jayne Harkins.

Mexican Commissioner Humberto Marengo said Mexico intended to comply with its obligations from the start but is grateful for U.S. support.

“I appreciate the humanitarian support offered by the United States so that, if needed, the Mexican communities that depend on the Rio Grande for their supply will have the necessary backing to cover their municipal needs, as established in Article 4 of Mexico’s Constitution,” the Mexican official said.

Under the 1944 Water Treaty, the United States is entitled to a portion of the water arriving in the Rio Grande from six Mexican tributaries for a total of 1,750,000 acre-feet (2,158.6 million cubic meters) over five years. The current five-year cycle ends on October 24.

“I want thank the United States for its understanding and solidarity,” Lopez Obrador said in a Thursday in a videoconference broadcast on YouTube. “We had some difficulties but they were understanding.”

Visit the BorderReport.com homepage for the latest exclusive stories and breaking news about issues along the United States-Mexico border. 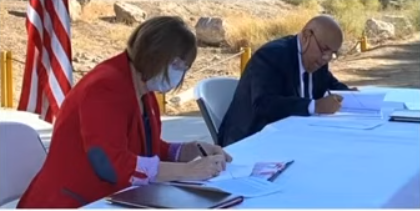