Photos: See the Halloween display so realistic police have been called twice

DALLAS (NEXSTAR) — Ever driven past a Halloween display that made you look twice? Some of them are pretty good, right?

A display is Dallas is so realistic, violent and horrifying that police have visited the home multiple times after receiving complaints from the public.

In fact, we’re going to warn you before scrolling down and check out the pictures. You may not want to check them out while eating…

It’s the work of artist Steven Novak — who can certainly be described as creative.

His eye-popping display features a dummy with its head smashed by safe, another stuffed body on the roof with a knife in its head and enough blood to make you think someone dropped a few cases of red wine in the front yard.

“I’m most proud of the wheelbarrow tipped over by the street full of Hefty bags, looking like a failed attempt to dispose of the dismembered bodies in the middle of the night.” Novak told the Dallas Observer. “A kid walked by and asked me what happened to them; I said they ate too many Skittles.”

While Novak can LOL at the display, some of his neighbors might not be chuckling. In addition to two visits from the police, he’s been told by others that cop cars are routinely driving by his front yard.

Novak told the Dallas Observer when police figure out what the deal is, they largely laugh it off.

“They told me they thought it was cool and that they were only there because they were required to reply to complaints from the sergeant,” he said.

With all the attention, you might think Novak will think twice before going “all out” next year. Not so.

“Honestly, though, I think I could’ve used more,” Novak said. “Next year, though!”

The gruesome pictures are below. View with caution! 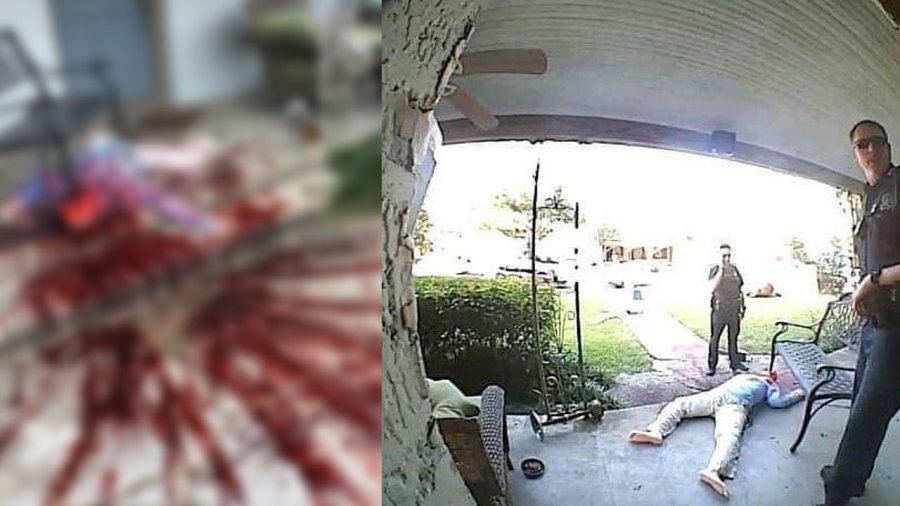