Grab your hats, gloves and coats before you walk out the door Monday and Tuesday!

Cold air is surging into the Tennessee Valley, cold enough to chill the entire region to the freezing mark through Monday morning.

Despite a clear sky at daybreak Monday, frost is not expected on vehicles thanks to a gentle northwest breeze that will provide just enough airflow to discourage frost crystals to form.

For many in the Tennessee Valley, Monday morning will bring the first freeze of the season. Temperatures will dip to around 32° by daybreak. Because it’s the first potential freeze of the year, the National Weather Service has issued a Freeze Warning.

Weather conditions will be cool Monday afternoon too! Afternoon highs will only reach the mid-50s, which is approximately 10-15 degrees cooler compared to average.

Cool and dry on Election Day

Tuesday will feature another cold morning as temperatures fall into the upper 20s and low 30s again. The wind will be light to calm, which means frost will likely form on grassy and metallic surfaces.

Tuesday afternoon’s highs will be much warmer compared to Monday’s, as the wind shifts directions and blows from the south. Expect temperatures to climb into the mid and upper 60s through the daylight hours of Election Day!

A warming trend is in store for the second half of the week. Check the News 19 Weather Authority Forecast Discussion for details on the weekend warmup. 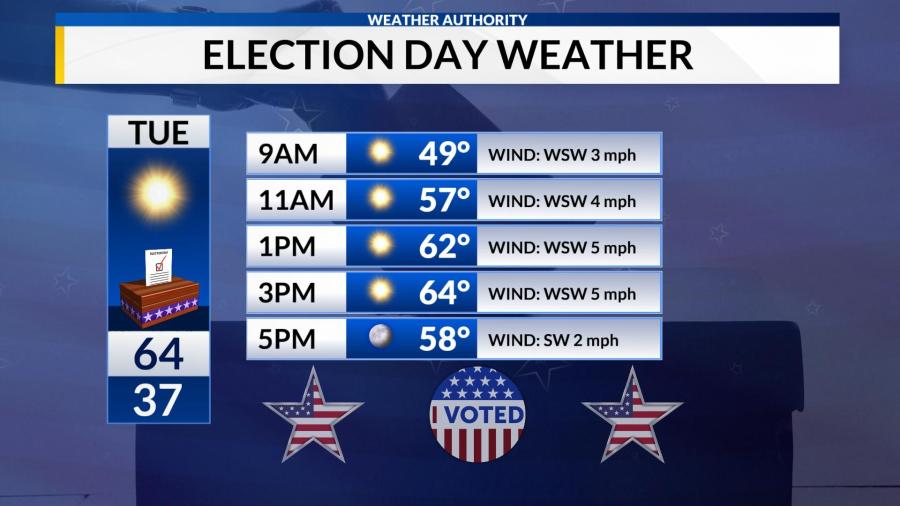