Jones was joined by state Democratic Party leaders election night at his watch party in Birmingham. The race didn’t go the way they wanted, but party leaders say there’s reason to feel good about the future.

“When I think about how many contacts we’ve made, the fact that we’ve had over 5 million contacts in the State of Alabama,” Congresswoman Terri Sewell pointed out.

“And we have expanded our digital reach across the state exponentially,” said England.

They say Jones’s time in office and his campaign propelled the party forward.

They also gave a nod to the record number of people who voted absentee, saying it shows voter enthusiasm for future elections.

“We also created early voting in the state of Alabama,” England said.

“Absolutely, with over 300,000 Alabamians voting in person. Every day is election day when you vote absentee,” Sewell stated to a crowd of Jones supporters.

During his concession speech, Doug Jones said he was proud of the last three years, but there is still more work to do.

In addition to tackling those issues, Jones said he wants to work on expanding equality in the state, continuing his campaign slogan of One Alabama. Then he quoted the late Congressman John Lewis, a hero of the civil rights movement.

“John always would quote the old African proverb, ‘when you pray, move your feet,'” Jones said. “He went on to say as a nation if we care for the beloved community, we must move our feet, our hands, our hearts, our resources to build and not tear down, to reconcile and not to divide.”

While Jones says there is still a lot of work to do in the state of Alabama, he did not lay out any specific plans on how he wants to move forward. 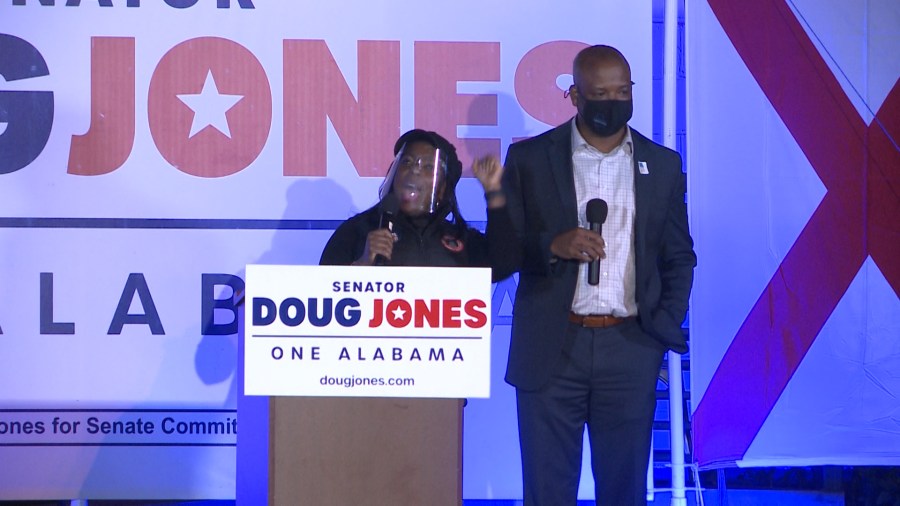