Live Updates: The latest from the remaining presidential swing states

(NEXSTAR) – More than 24 hours after polls began to close we still do not have a clear answer as to who will be the next President of the United States.

Through the night we will be providing running updates from the remaining sates and the campaigns below (all times Eastern):

Dozens of supporters of President Donald Trump chanting “Stop the count!” descended on a vote-tallying center in Detroit as Americans on both sides of the political divide vented their anger and frustration over the undecided presidential contest at a handful of protests across the country.

Video shot by local journalists showed dozens of people gathered outside the TCF Center in Detroit and inside the lobby, with policemen lined up to keep them from going into the counting area.

Earlier, the Republican campaign filed suit to stop the count until Michigan’s secretary of state, a Democrat, allowed in more inspectors.

Former Vice President Joe Biden said earlier Wednesday that he wouldn’t declare victory, but felt confident that he would emerge the winner once the votes were counted.

Democrat Gary Peters has held onto his Senate seat in Michigan. He has defeated Republican challenger John James, a Black business executive and former combat veteran.

The 61-year-old Peters continued Democrats’ dominance of Senate elections in the presidential battleground state. Republicans, who have won just one Senate seat in Michigan since the 1970s, spent heavily to try to unseat Peters in one of their few pickup opportunities.

Peters is a low-key former congressman, state lawmaker, lottery commissioner and investment adviser who served in the Navy Reserve. He ran by emphasizing his bipartisan work and by criticizing James’ support for President Donald Trump.

It’s not yet clear when Nevada vote count totals will be high enough to award the state’s six electoral votes to President Trump or Joe Biden, but we do know that no additional results will be released Wednesday.

The Nevada Deputy Secretary of State for Elections admitted he made a mistake when he said there would be a result update Wednesday, blaming a lack of sleep.

Elections officials went back and forth through the day, creating conflicting reports about when we would get further clarity about which candidate was likely to claim the state’s six electoral votes.

But then Clark County Registrar of Voters Joe Gloria said Wednesday afternoon he did not have any numbers to release on ballot counting until Thursday because he wanted to provide accurate information. Gloria said his office will begin providing daily vote count briefings on Thursday.

President Donald Trump’s campaign and the Georgia Republican Party have filed a lawsuit against the Chatham County Board of Elections asking a judge to order the county to secure and account for ballots received after 7 p.m. on Election Day.

State party chair David Shafer said in a statement Wednesday night that they planned to sue in a dozen counties.

In Georgia, ballots must be received by 7 p.m. on Election Day in order to count. Chatham County contains Savannah and leans Democratic. 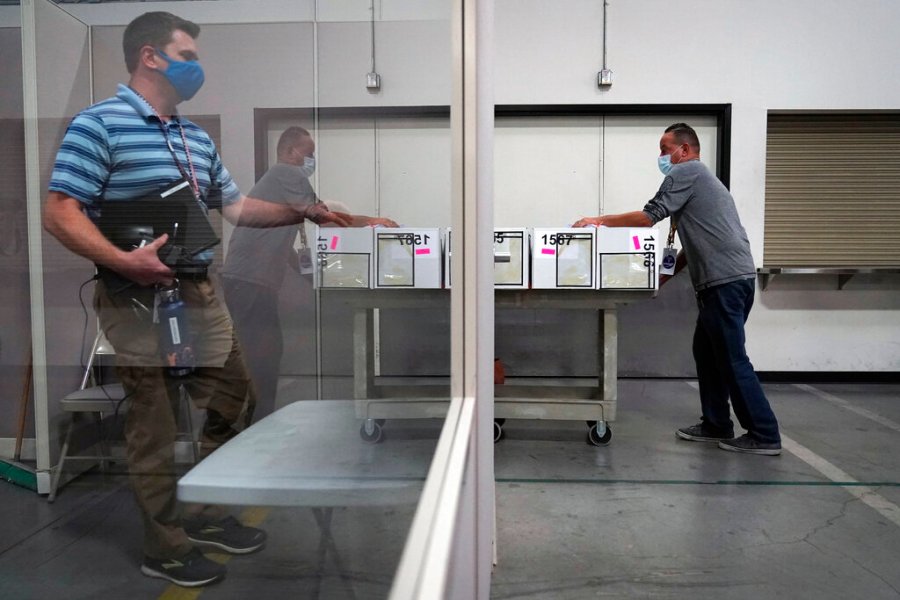