When will Georgia be called for Trump or Biden?

ATLANTA (NewsNation Now) — A winner has not been declared in Georgia’s presidential contest because the race between President Donald Trump and Democratic nominee Joe Biden is still too early to call Wednesday with ballots still left to be counted.

Georgia Secretary of State Brad Raffensperger announced Wednesday evening as of 9:45 p.m. ET that there are approximately 98,829 outstanding ballots.

“Officials in numerous counties are continuing to count ballots, with strong security protocols in place to protect the integrity of our election,” said Raffensperger. “We have long anticipated – and said publicly – that counting would most likely take place into Wednesday night and perhaps Thursday morning. We’re on pace to accomplish that responsibly, ensuring that the voice of every eligible voter is heard. It’s important to act quickly, but it’s more important to get it right.”

Raffensperger also cited several security measures that were implemented “to secure the vote and increase public confidence in the electoral process.”

“We’re well aware that with a close presidential election and the possibility of runoffs in some elections that the eyes of the state and the nation are upon Georgia at this time,” Raffensperger said. “We’re as anxious as anyone to see the final results and to start work on certification and planning for our runoff elections. As the work goes on, I want to assure Georgia voters that every legal vote was cast and accurately counted.”

Raffensperger also said that ballots that usually aren’t counted until after Election Day such as those sent by military people and other citizens living overseas will eventually be incorporated into the final totals.

In Fulton County, home to Atlanta and Georgia’s most populous county, election officials brought in a fresh shift of workers Wednesday night. Rick Barron, the county elections supervisors, said he planned to keep working until midnight or later to finish the count.

“We’re going to finish tonight,” said Barron, who estimated about 36,000 absentee ballots remained to be counted. “As long as it takes we’re going to be here.”

Early Wednesday, President Trump prematurely claimed he carried Georgia — and several other states that were too early to call.

He also said he planned to contest the U.S. presidential election before the Supreme Court. It was unclear exactly what legal action he might pursue.


The presidential race is not decided; here are the states we’re waiting for

In Chatham County, a heavily Democratic county that includes Savannah, the Georgia Republican Party and the Trump campaign filed suit Wednesday essentially asking a judge to ensure that state laws are being followed on absentee ballots. Campaign officials said they were considering peppering a dozen other counties around the state with similar legal filings.

In Gwinnett County, also one of Georgia’s largest, a software problem interfered with the way thousands of mailed absentee ballots are scanned in batches, county officials said. Raffensperger’s office said that problem was addressed on Tuesday night.

Inside State Farm Arena, the home of the Atlanta Hawks NBA team, about 50 people were counting Fulton County votes in a well-lit conference room on Wednesday.

Several miles away, representatives for the Democratic and Republican parties sat around a few computers in a corner of a large warehouse on Atlanta’s westside to review Fulton County absentee ballots that were flagged by scanners. They reviewed the ballots on monitors, looking for marks that indicated voters’ intent.

In Cobb County, also in metro Atlanta, approximately 15,000 absentee ballots remained to be processed on Wednesday or Thursday, Cobb County Elections Director Janine Eveler said Wednesday morning. Then, on Friday, the county plans to process another 882 provisional ballots along with any military and overseas ballots and any ballots with missing or mismatched signatures that have been corrected.

No Democratic presidential candidate has won Georgia since Bill Clinton was first elected in 1992, and it’s been 22 years since a Democratic nominee for governor or U.S. Senate carried the state. 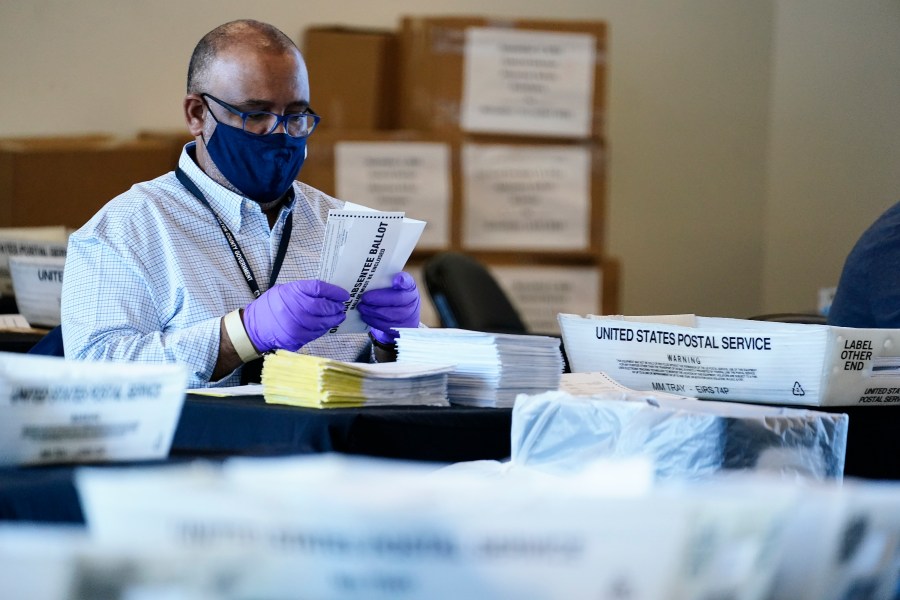