The Trump campaign wants to block the commonwealth from certifying the election results. Results that show president-elect Joe Biden with a 70,000 vote victory. Lawyers for the the Trump campaign are continuing to work on this case right up to tomorrow’s hearing in Williamsport.

Though no clear evidence of widespread voter fraud has been presented, the legal team claims Pennsylvania treated voters and poll watchers differently based on their party affiliation. The Trump campaign argues that Democratic voters in Pennsylvania received more favorable treatment as compared to Republican voters, at polling places, as well as the processing of mail-in and absentee ballots.

The Trump campaign filed an amended lawsuit against the Secretary of the Pennsylvania Department of State and seven counties they say improperly handled the election process, with a focus on the mail-in and absentee ballots.

“We are asking the court not to certify the results of the election, to enjoin. It’s a legal term telling the state they cannot before we have meaningful access to these ballots so we can understand what constitutionally we should do with almost 700,000 ballots,” Trump 2020 Senior Legal Advisor Jenna Ellis said.

Ellis says the amended lawsuit is designed to streamline their case to the court.

“Substanially really nothing is different. We still have Equal Protection due process claims. We still have everything moving forward, so typically through the course of litigation there are amended complaints that are filed with either new or more accurate information or simply allege concerns more focused more clearly for the court,” Ellis said.

Democratic Congressman Matt Cartwright tells Eyewitness News, “I think that American citizens have a legitimate right to go to court to hear their grievances. You know it’s really a price of being an American that we have an impartial mind, not putting on a Democrat or a Republican hat and coming up with a just decision.”

Cartwright adds that evidence of voter fraud has yet to be proven.

“If a lawsuit is brought without evidence, that’s a frivolous lawsuit and should be thrown out. Some have already been around the country. But there is a time and place for everything and people here had a full and fair opportunity to present evidence and that’s the time to judge whether something was legitimate or not,” Cartwright said.

A hearing is scheduled for 1:30 p.m. Tuesday in federal court in Williamsport. Eyewitness News will be there and will have reports throughout the day on air and online on PAHomepage.com.

Eyewitness News reached out to Secretary of State Boockvar’s office.

A spokesperson says in part: “We cannot discuss any specific litigation. Pennsylvania had a free, fair, and secure election and each voter, regardless of political party must have their voice heard. Allegations of fraud and illegal activity have been repeatedly debunked and dismissed by the courts.” 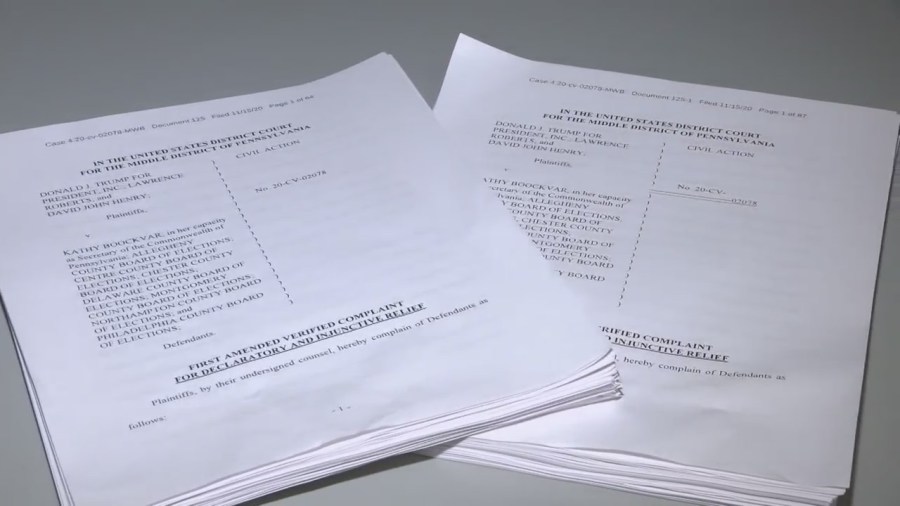