All aboard to Harrison Brothers Hardware for the holidays

HUNTSVILLE, Ala. – Harrison Brothers Hardware has been standing tall on the south side of Huntsville’s downtown square since 1897. It’s a piece of our past that reminds us of what used to be.

We recently caught up with three guys who are bringing back some of those Christmas Past memories. Mike Roddy, Steve Moeller and Ernie Golwitzer love model trains. “I’ve got my own layout in my house,” Steve said with a smile, “It’s up permanently.”

They can’t get enough of them. “That’s why I’m here,” Ernie said, “I had one when I was a kid and hadn’t see them until these two invited me along when Covid showed up and this has been and every Tuesday pleasure.” The guys spend several hours a week at Harrison Brothers changing out model trains in the window every Tuesday.

Their love of model trains started at a young age. “My brother’s a bit older than me and I had his train set and so in our basement where we lived, I set up a four by eight sheet of plywood and started running all of his trains,” Steve told me.

They were little boys when their love affair with trains started. “We were not a wealthy family,” Mike said, “We lived on a farm in Nebraska, but my father always managed to get enough money together. He could go down to what we called the sale barn and pick up a new to us model train every Christmas.” He had the biggest grin on his face when he shared that childhood memory.

When the folks at Harrison Brothers called and asked them to set up something in their store window for the holidays, they were all aboard! “One Monday he called me up and said, hey Ern, how would you like to go play with trains? And I said dad gum it, I ain’t done that since I was five years old, so the rest is history,” Ernie said laughing, “Here I am.”

It’s a labor of love that takes a team. “When we were on the tracks, we’re running the transformer and cleaning,” Mike said, “it takes all three of us.” Each move and step are carefully planned. There’s no room for error.

The trains are changed out every Tuesday morning. “We’re trying to do that to save the wear and tear on the trains plus create interest to bring people back every week to see something new,” Mike said. They spend another day cleaning the tracks because they get dirty from the trains running for a half hour each hour non-stop.

The guys have something else in common. “We’re the old geezers club,” Ernie said with a laugh, “We’ve been out longer than we were in and we’re still vertical.” They all retired from the army. You can imagine how excited they were to set up and run military trains during Veterans Day week.

There’s just something magical about watching a train run around a track. The day we were there, we saw that delight in the eyes of several children who stopped and watched them through the front window.

For a few moments, we can escape the real world. “We wish we were up in the cab running that big train so we know we can’t do that so we can do the little ones,” Steve said. It brings back childhood memories that last a lifetime. “You’re running it. You set the cars up the ones you want to use. You run them on the track you want to, fast or slow,” Mike said with a huge smile, “You are in control. You’re the engineer.”

The trains will be on display through the holidays. They run on the hour for a half hour starting at 10 a.m. through 7:30 p.m. each night. They let the trains pull into the station and stop so they don’t overheat. Tis the season to see things through the eyes of a child, reliving magical moments and creating new ones. It’s a great opportunity to watch toy trains and do some holiday shopping at the historic Harrison Brothers Hardware store. 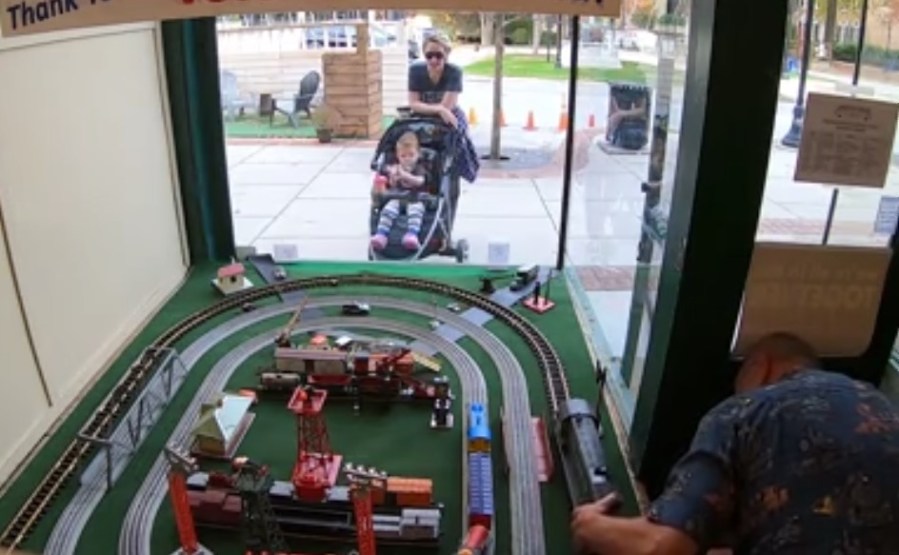