TUSCALOOSA, Ala. (AP) — Mac Jones passed for 302 yards and five touchdowns, highlighted by two long ones to DeVonta Smith, and No. 1 Alabama rolled over rival No. 22 Auburn 42-13 on Saturday without coach Nick Saban.

The Crimson Tide (8-0, No. 1 playoff rankings) continued a dominating march through a schedule of all-Southeastern Conference games even minus its six-time national champion coach on the sideline.

Saban tested positive for COVID-19 on Wednesday and watched the game feed from home, witnessing the usual array of big plays with offensive coordinator Steve Sarkisian running the show.

The result was much of the same against the Tigers (5-3), who suffered the second-most lopsided loss of Gus Malzahn’s coaching tenure. The only bigger margin was Alabama’s 52-21 win in the 2018 Iron Bowl.

Alabama started a string of three straight touchdowns with Jones’s 66-yard touchdown to Smith, who was streaking by himself downfield after Auburn defenders bit on a pump fake. He later added a 58-yard catch and run on a quick slant, sprinting away from the Tigers.

Smith had seven catches for 171 yards. Najee Smith ran for 96 yards, including a 39-yard touchdown, and John Metchie III caught a pair of scoring passes.

Bo Nix passed for 227 yards and ran for a late touchdown for the Tigers, but also threw two interceptions.

Auburn: Managed a solid 347 total yards but had some missed opportunities. The Tigers had to settle for three long field goal attempts by Anders Carlson, who made kicks of 45 and 47 yards. Star receiver Seth Williams, who’s from nearby Cottondale, dropped a sure touchdown, too.

Alabama: Continued its strong defensive play of late, having given up 33 points in its last 18 quarters dating back to halftime of the Georgia game.

Alabama was already a unanimous No. 1 and didn’t do anything to diminish its standing. Auburn could fall out of the rankings with the loss.

Malachi Moore’s interception of Nix late in the first half was his third of the season. He’s the first Alabama freshman with multiple picks since 2015 when Minkah Fitzpatrick, Ronnie Harrison and redshirt Marlon Humphrey all did it.

Alabama: At defending national champion LSU, one of two teams to beat the Tide last season, in a makeup game Dec. 5. 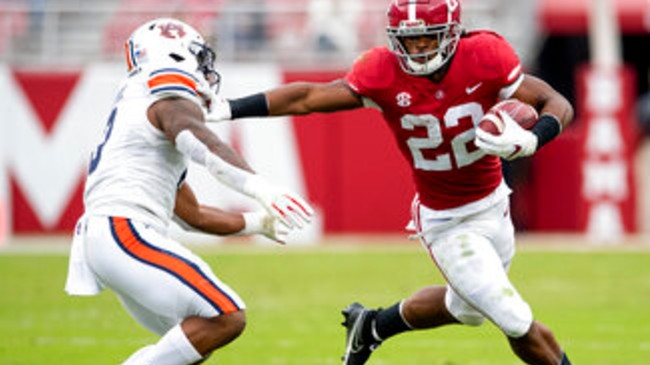