PHENIX CITY, Ala. (WRBL) – In a second police brutality lawsuit, Phenix City Police Chief Ray Smith and the City of Phenix City itself are named as defendants along with a former officer accused of excessive force.

The suit comes on the heels of a 2018 case that recently settled. Michael Ruda sued three Phenix City Police Department officers, claiming they used excessive force and violated his Fourth Amendment rights. The settlement hit the city budget for $225,000.

Ruda’s attorney, Griffin Sikes Jr. of Montgomery, Ala. has filed a second suit involving a different incident and the same police officer at the center of the previous case, Tobias Boisvert, as well as the city’s Police Chief, and the city itself.

Sikes says the case boils down to two factors: Boisvert was allowed to remain on the force after multiple disciplinary issues, and that Phenix City officers do not have liability insurance.

Sikes’s client, K’Cee Odom is the owner of local restaurant, Blessed Hands Soul Food in Phenix City. Odom is trying to recover damages against the city after Boisvert, who is no longer on the force in Phenix City, used his taser on him after Odom called police on Sept. 12, 2019 to break up “a disturbance” at his restaurant between two female patrons who Sikes says got “loud and raucous” before being asked to leave.

The two women also called police from the parking lot, and Boisvert arrived on the scene to “investigate the phone calls,” court records show. While speaking with police, the two women went back into Blessed Hands. Records from the plaintiff that Odom again tried to have the women leave.

The next moments make up the core of Odom’s complaint, and the city’s defense.

At the time of the incident, Sikes claims his client was unarmed, had made no threats, or physically made contact with anyone. They argue in their claim that Boisvert’s use of force was unlawful, unprovoked, excessive, and violated Mr. Odom’s Fourth Amendment rights.

“…we don’t feel there’s any liability to Mr. Odom for anything. He, suffice it to say, he was about to attack a woman, an elderly lady sitting in a chair and was running uncontrollably across the room which is on video,” said McKoon. “He was tased in order to stop him doing that, he didn’t receive any injury from it. We look at it as a nuisance suit.”

Just over a month before the incident at Blessed Hands Soul Food, Boisvert received a service recognition for his five years with the PCPD. City Council minutes name him among other recipients in an Aug. 6, 2019 city council session. The award was given to multiple city employees presented by City Manager Wallace Hunter and HR Director Stephanie Chastain.

The bodycam footage is not currently available, and has not been filed as evidence in the court case yet.

Sikes says he has taken statements from witnesses from the incident. He says they don’t believe there was any justification for Boisvert to use his taser on Mr. Odom during the incident.

Boisvert is no longer an Alabama resident or a member of the Phenix City Police Department, and according to Sikes is living in Florida. Boisvert’s current location presents difficulties in the coming court proceedings as the legal teams for both parties negotiate when and where depositions will take place.

Sikes says the defense team wants to have Boisvert deposed in Florida, rather than have Boisvert come back to Alabama to provide testimony in the case.

When the two parties meet in court, Sikes says they’ll go before a judge to “try and work it out.”

The second lawsuit against Boisvert, and the addition of defendants Police Chief Ray Smith and the City of Phenix City, centers on more than just the use of force itself. Specifically, Sikes says that the second lawsuit is focused on what he calls negligent hiring practices used by the city and its police department.

Sikes’s argument on behalf of Mr. Odom is fed by a lack of liability insurance for police officers, as well as protections for employment that a qualified immunity case doesn’t include.

Section 1983 claims must meet the following legal requirements to proceed, according to official US court documentation, but a case about police force is different than other Section 1983 cases:

In most cases of a Section 1983 claim, there’s a legal term involved called respondeat superior, which is a legal doctrine that holds employers responsible, or liable, for the acts of their employees while they perform their work. Respondeat superior is also known as a “master-servant rule” according to TheLawDictionary.org.

In most cases of a Section 1983 claim, there’s a legal term involved called respondeat superior, which is a legal doctrine that holds employers responsible, or liable, for the acts of their employees while they perform their work. Respondeat superior is also known as a “master-servant rule” according to TheLawDictionary.org.

However, Sikes says the Section 1983 Law doesn’t have respondeat superior in it. This means that the liability for officers in Phenix City excessive force cases don’t share responsibility with the PCPD or the city for any injuries caused by an officer, or any damages that would need to be paid to someone who successfully sues on rights violations.

“In this particular case, the reason that we sued Ray Smith, Mr. Smith also, the police chief, he continued to hire what he knew, we believe, to be a bad cop, a cop that had a history of problems, excessive force cases, and some other disciplinary matters that should have prompted his not being on the force, not being able to assault my client, Mr. Odom, at his restaurant,” Sikes said.

Now that Sikes is taking Boisvert to court again, he’s focusing on the circumstances that allowed another excessive force claim to be filed against the same officer, and the same police department, in less than a year from the Ruda case.

Sikes says that under Alabama law, and under the Section 1983 Law, there’s “such a thing as negligent hiring or negative retention of an employee.” In layman’s terms, if an employee has shown their boss that they’re not fit for the job, or they are kept on the job even though they’ve shown that they’re “dangerous to the public,” Sikes says the Police Chief and the City of Phenix City should be responsible for continuing that employee at work.

In this case, Sikes said “…we think that Mr. Boisvert was [dangerous to the public], he had proved that to the city and to the police chief…in 2018, [Chief Smith] acknowledged that what Boisvert had done , the long list of disciplinary matters were termination offenses, yet the Chief, Ray Smith, kept him on.”

For Odom v. Boisvert et al, Sikes is suing the City of Phenix City, Police Chief Ray Smith, and former-Cpl. Tobias Boisvert on a claim of the excessive force used when K’Cee Odom was harmed by a taser in his own restaurant, and the claims of negligence against the city and the police chief for keeping Boisvert on the force.

Based on the settlement from the Ruda case, Sikes says the taxpayer dollars are not being used how they should be, and are instead being used to “bail out an unfit police officer, and it looks like we’re going through that same situation again.” 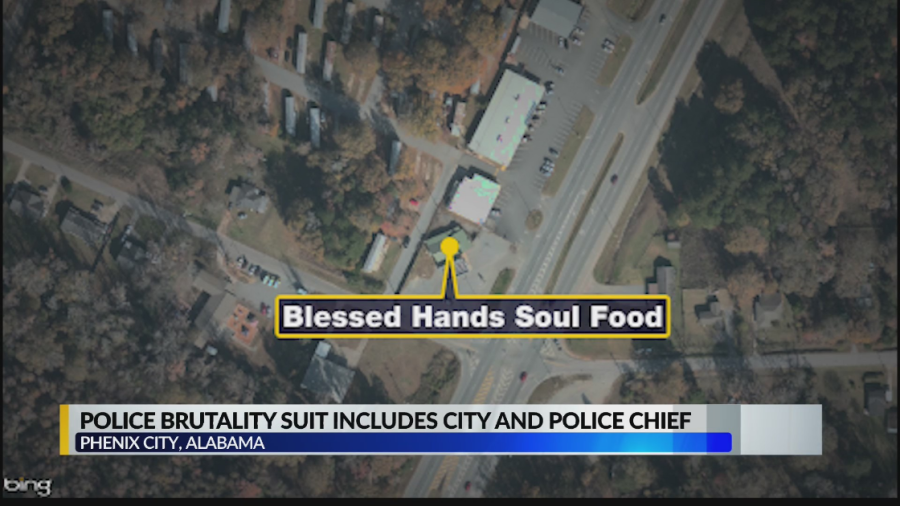