SCOTTSBORO, Ala. – The Jackson County Sheriff’s Office is in the holiday spirit of giving. They gave the Scottsboro Jackson County Rescue Squad $1,000.

The money comes from the agency’s No Shave November campaign.

Chief Deputy Rocky Harnen said the event actually runs throughout the year. He explained that deputies can pay $10 a month to keep or grow a beard, as long as it kept neat.

Captain Eddie Tigue with the Scottsboro Jackson County Rescue Squad told News 19 that the volunteer group helps in various situations including cave rescues and water rescues like the tragic dock fire in January.

Eight people died in the fire, but members of his team pulled seven people from the water, according to Tigue.

“We would typically use money like this for just day to day operations. Fuel, power bills, light bills, things that everybody else has. Fuel is one of the biggest costs we incur every year. When we go out, it’s not just one vehicle. It could be three or four,” explained Tigue.

“The Scottsboro Jackson County Rescue Squad is there for us whenever we call. They’re an amazing group of folks, they’re very dedicated,” added Harnen.

The Jackson County Sheriff’s Office donates the accumulated money to various agencies in the area.

In 2019, it was donated to the Children’s Advocacy Center. 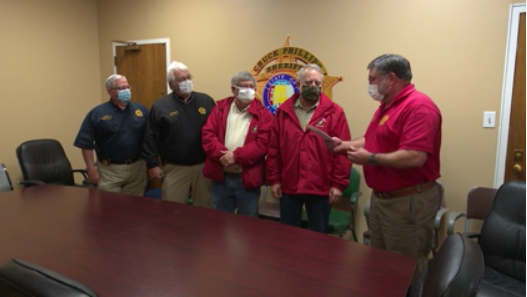