Alabama was No. 1 for the fifth week in a row Sunday and extended its streak of consecutive poll appearances to 210, the third longest in the history of The Associated Press college football poll.

The Crimson Tide were the unanimous No. 1 for the third straight week and the top seven teams were unchanged for a fifth consecutive poll.

Notre Dame was No. 2, followed by Ohio State, Clemson and Texas A&M to round out the top five. No. 6 Florida and No. 7 Cincinnati also held their spots.

BYU was the only top-10 team to lose, falling in a thriller at Coastal Carolina on Saturday. The Cougars dropped six spots to No. 14 and the Chanticleers jumped three spots to No. 11.

No. 24 Buffalo is ranked for the first time in school history, breaking into the Top 25 this week without playing a down. The Bulls had their game at Ohio called off on Friday while on their way to Athens because the Bobcats were having COVID-19 issues.

Buffalo is the first Mid-American Conference team to be ranked this season, giving every FBS league at least one ranked team during this pandemic-altered season.

The Bulls have been an FBS school playing in the MAC since 1999 and had only two non-losing seasons before Lance Leipold took over as coach in 2015. Leipold, who built a Division III powerhouse at Wisconsin-Whitewater, is in the midst of his fourth straight season of .500 or better at Buffalo.

While the top seven teams in the rankings remained in a holding pattern, the back half got a shake-up with Buffalo and the Colorado Buffaloes stampeding into poll.

Marshall, Oklahoma State, Oregon and Washington all fell out. For Oklahoma State, its third loss of the season knocked the Cowboys out of the rankings for the first time this season.

Marshall fell out all the way from No. 15 after getting shut out by Rice at home on Saturday in one of the most surprising upsets of the season.

The Ducks’ and Huskies’ exits left the Pac-12 with two ranked teams: No. 16 Southern California, which was scheduled to play Sunday night against Washington State in a game delayed because of COVID-19 issues, and No. 21 Colorado.

Under first-year coach Karl Dorrell, the Buffaloes (4-0) are ranked for the first time since a two-week stint in 2018. That season started 5-0 and ended with a seven-game losing streak and a coaching change.

— No. 7 Cincinnati at No. 18 Tulsa. A rematch for Dec. 19 in the American Athletic championship game is already assured, with only the site of the game to be determined.

— No. 20 North Carolina at No. 9 Miami. Interesting matchup between the ACC’s third and fourth best teams. 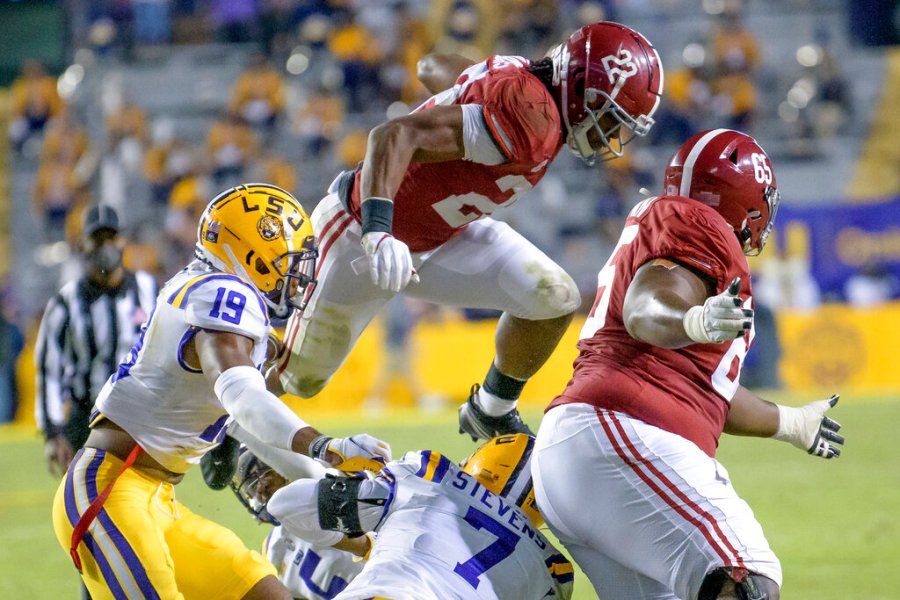