BATON ROUGE, La. (AP) — Mac Jones passed for 385 yards and four touchdowns and No. 1 Alabama used a slew of explosive plays to run away from LSU 55-17 on Saturday night.

Jones threw three of his touchdown passes to Louisiana native DeVonta Smith, who went to the same high school as Louisiana Gov. John Bel Edwards and finished with eight catches for 231 yards in his return to his home state.

Smith’s first two touchdowns went for 65 and 61 yards to cap three-play, 75-yard drives for Alabama (9-0, 9-0 SEC). But his third touchdown catch from 20-yards out appeared to be his most difficult. He shed close coverage from top LSU cornerback Derrick Stingley Jr. and made a twisting, leaping catch high over his head before landing on his back deep in the end zone.

Najee Harris rushed for 145 yards and three touchdowns on 21 carries, juking, shedding and even leaping over LSU defenders along the way.

One nearly didn’t happen when receiver Kayshon Bouttee caught a 43-yard pass and released the ball in celebration just before crossing the goal line. Luckily for LSU, Jontre Kirkland was following the play and picked the ball up in the end zone to complete LSU’s first scoring play against Alabama in Tiger Stadium since 2014.

Later, John Emery Jr. ran for a 54-yard touchdown, the longest run allowed by Alabama this season. Each score pulled LSU as close as two touchdowns, but the Tide answered each with the two deep connections between Jones and Smith.

Jones had 338 yards and four TDs passing by halftime, when Smith had seven catches for 219 yards. Smith’s third TD gave the Crimson Tide a 45-14 lead by halftime.

Aided by an LSU offside penalty on third and 3, Alabama drove 75 yards in seven plays on the opening series, taking a 7-0 lead on Harris’ zig-zagging, 14-yard run.

LSU responded by quickly driving to the Alabama 15, briefly enlivening the socially distanced crowd of 22,349 in 102,000-seat Death Valley, only to come up short on third and 1 and fourth and 1 — both rushes by Tyrion Davis-Price.

Two plays later, Alabama was inside LSU’s 20 after Harris rushed for 28 yards down the left sideline and LSU was penalized 15 yards for a late hit out of bounds.

Soon after, Harris scored from a yard out to make it 14-0.

Before the first quarter ended, Jones connected with wide-open tight end Jahleel Billingsley on the left side of the field for a 24-yard score that made it 21-0.

That marked the most points allowed in a first quarter by LSU since coach Ed Orgeron took over four games into the 2016 season.

Alabama: With coach Nick Saban back on the sideline after recovering from COVID-19, the Crimson Tide had little trouble turning this game into the mismatch it was widely believed to be. Alabama put up the highest point total in the 85 games these teams have played since 1895. If anything, the four-touchdown spread underestimated the gulf between Alabama and an LSU program that has fallen far since last season’s Tigers finished as unbeaten national champs.

LSU: The young and rebuilding Tigers had moments when their talent and effort revealed their potential. But their execution remained inconsistent and seemingly no mistake went unpunished by an Alabama squad that came in outscoring opponents by an average of 30 points this season. The Tigers gave up the most points by an LSU team since 1993 (vs. Florida) and now must win their final two regular season games and a bowl game — if they go to one — to finish 2020 with a winning record.

There’s no reason to expect Alabama to drop from No. 1 after winning in precisely the convincing manner forecast by oddsmakers and analysts alike.

Alabama: Visits Arkansas to close out its regular season.

LSU: Visits sixth-ranked Florida in a game rescheduled from Oct. 17 because of a COVID-19 outbreak affecting the Gators. 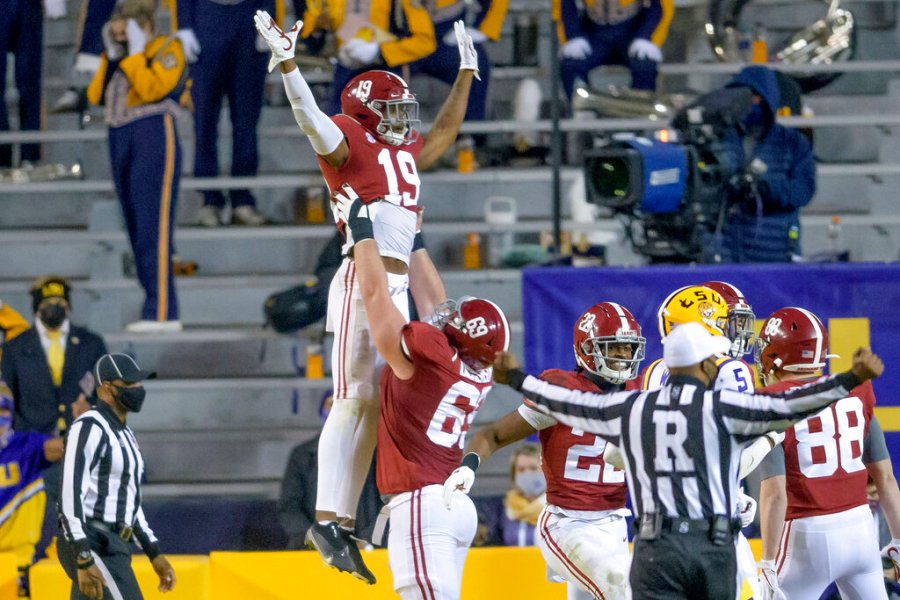