NASHVILLE, Tenn. (AP) — Baker Mayfield and the Cleveland Browns can do more than just run the ball, and the NFL’s longest active playoff drought is moving closer to an end after 18 seasons.

Mayfield threw for a season-high 334 yards with all four of his touchdown passes in the first half, and the Browns scored the first 17 points before holding on to win their fourth straight, 41-35 over the Tennessee Titans on Sunday.

With both chasing AFC playoff berths, the Browns looked like the team leading a division — they are second in the AFC North behind the unbeaten Pittsburgh Steelers — as they improved to 9-3 for the third time in their expansion era.

The Titans (8-4) came in leading the AFC South and left tied after the Colts beat Houston 26-20, though Tennessee still has the better division record. The Titans fell apart after a bad fourth-down spot on their opening drive. NFL rushing leader Derrick Henry lost his first fumble this season on the next drive.

Mayfield kept the Browns from needing the NFL’s top rushing offense in what had been expected to be a run-game showdown against the Titans and Henry. The Browns had their best-scoring half ever, leading 38-7 at halftime, topping the 35 points scored in the second half at Cincinnati in 2004.

The Titans made it interesting late.

Kenny Vaccaro picked up a fumble by Mayfield and ran it 53 yards with 48 seconds left. Ryan Tannehill hit Cam Batson for an 8-yard TD pass with 28 seconds to go, but Andy Janovich recovered the onside kick to seal the Browns’ longest winning streak since they closed out 2009 with four wins.

Mayfield became the first Browns quarterback to throw four TDs in the first half since Hall of Famer Otto Graham in 1951. Mayfield, who threw four of his five TDs in the second half of a win against Cincinnati on Oct. 25, had only two touchdown passes over the past four games combined.

Nobody else in the NFL has thrown four TD passes in a half this season, and Mayfield had 290 yards by halftime, just off his season high of 297 yards.

This time, Mayfield completed passes to eight different receivers with a TD pass apiece to Jarvis Landry; backup tackle Kendall Lamm who became the first Browns lineman to catch a TD pass since 2001; a 75-yarder to Donovan Peoples-Jones and a 17-yarder to Rashard Higgins.

The Titans got a bit cute on their opening drive. Tannehill threw a pass to wide-open offensive lineman Aaron Brewer, who dropped the ball. Then Henry ran on fourth down and appeared to pick up the first down, but officials marked him short of the marker. Coach Mike Vrabel unsuccessfully challenged the spot.

Tennessee opened the second half scoring back-to-back touchdowns within the first six minutes. First, Tannehill threw a 22-yard pass to MyCole Pruitt. The tight end picked up A.J. Brown’s fumble on a 16-yard catch and ran 3 yards for a TD on the next drive to pull the Titans within 38-21.

The Titans came in with five turnovers, the fewest in the NFL. Cleveland forced three, the last at the end of the third quarter. Adam Humphries, playing his first game since Nov. 1 because of a concussion, bobbled a pass from Tannehill that was picked off by cornerback M.J. Stewart at the Browns 9.

Tennessee’s Corey Davis had career highs of 11 catches for 182 yards, including a touchdown catch, as the Titans tried to rally through the air in the second half.

Myles Garrett got a sack of Tannehill early in the fourth quarter, giving him 10 1/2 for the season. He came in tied for second in the league despite missing two games. He led the league in sacks when he went on the COVID-19 list.

Browns: Linebacker Mack Wilson was checked for a concussion.

Titans: Brown went down in the first half with an apparent right ankle injury but returned.

The Browns host the Baltimore Ravens on Monday, Dec. 14.

The Titans visit Jacksonville next Sunday. 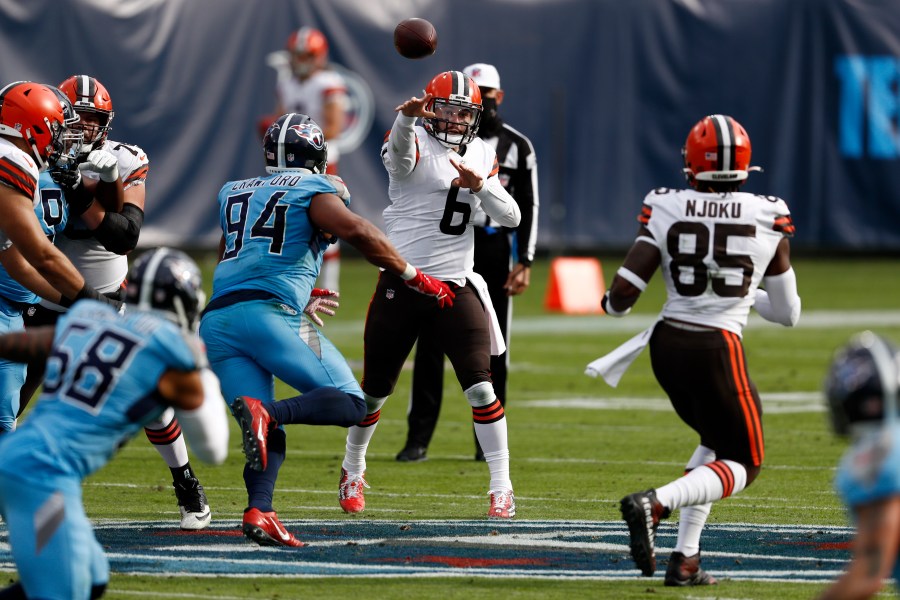